You Say You Want a Revolution

Posted by Dennis Brooke on Jul 4, 2016 in Europe, Ireland, Travel Update | No Comments 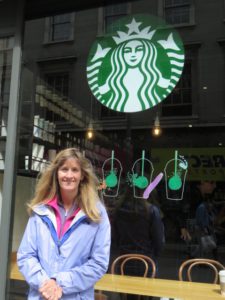 We picked a great time to stay in Ireland. The Republic of Ireland and Northern Ireland both played in the Euro 2016 football (what we Americans call soccer) tournament and each advanced into the round of 16 before being defeated. We even caught several games at local pubs.

The weather, which reminds us of April in Seattle, has been merciful enough for us to get in a day trip to Belfast and other sites in Northern Ireland and another trip south to Waterford and Kilkenny. 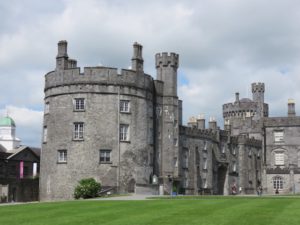 But one of the highlights is that we are here during the Centennial of the 1916 Easter Rising. Both the United States and Ireland took to arms to win their freedom from England and become independent republics. The Republic of Ireland’s final path to freedom was born in the Easter 1916 armed insurrection, fought primarily in the streets of Dublin. 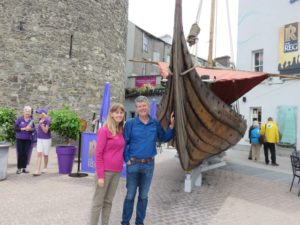 Recreation of Viking Longship in Waterford

Irish/English history in a nutshell: The English came to Ireland in 1169 when they were invited in by the Irish King of Leinster who had lost his kingdom. He enlisted a Norman lord from England known as Strongbow who helped the Irish King win back his lands. He eventually assumed the kingship himself and even expanded his holdings. The Normans integrated themselves into Irish culture and society—in some respects becoming more Irish than the Irish—but their English rulers didn’t fancy that. In the centuries that followed there were attempts to stamp out the Irish culture, language, and religion. Periodic rebellions by the Irish failed to win them their freedom.

But Easter week 100 years ago, the Irish launched an armed insurrection to become an independent nation. We took a walking tour of key sites from the Easter Rising. For us, it’s like walking in Philadelphia, Boston, Lexington, and Concord in 1876. 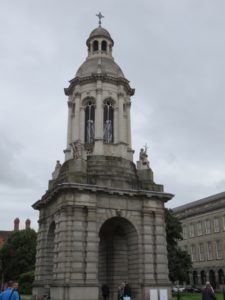 We visited Trinity College from where British snipers shot at both Irish troops and civilians. We visited the General Post Office (GPO), just north of the River Liffey, which served as rebel headquarters. Our guide described the battles that took place in the streets, the pirate radio station that broadcast news to the world, and the reading of their “declaration of independence” on the steps of the GPO. 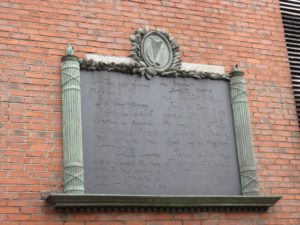 Michael O’Rahilly Letter to his wife 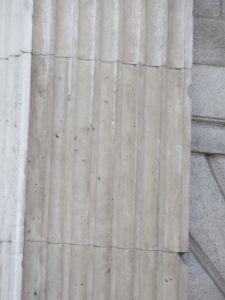 We walked the path of the retreat that the rebels took when shelling caused them to abandon the GPO. We saw the building from where the surrender was issued, five days after the rising began. And we saw a recreation of a poignant farewell letter written to his wife by a rebel officer, Michael O’Rahilly, as he lay dying in a doorway. 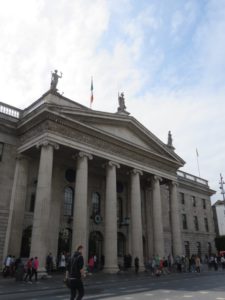 By many measures, the rising was a failure. Despite holding key locations for nearly a week the rebels were forced to surrender and fifteen were executed, including the seven signatories of the proclamation. Nearly 2000 others were imprisoned.

But out of that failure was born a free state. Public opinion in Ireland and the US turned against the British, in part due to the executions. Many of those imprisoned began to plan the next stage in the revolution. Finally, after more armed insurrection, the Irish Free State was created in December of 1922. 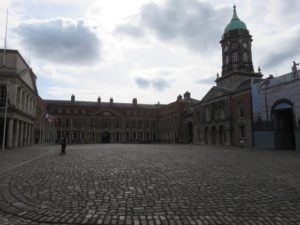 Today the Emerald Isle is divided into two nations, the Republic of Ireland which consists of twenty-six counties, and Northern Ireland, which is made up of six counties that chose to remain part of Great Britain. The Irish civil war and “troubles” that ensured from that partition is another story. But fortunately, things have been peaceful since 1998.

The US, Great Britain, and two Irelands are friends and allies now. When we crossed into Northern Ireland earlier this week there was no border crossing station, just a “Welcome to Northern Ireland” sign. After fighting two wars with the English in our early years the US has become a strong ally of Great Britain. 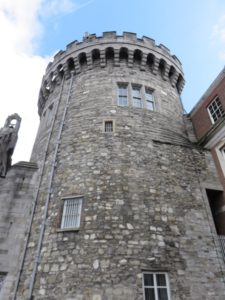 But there was a day when both the American and Irish republic took up arms to win our freedom. It’s fun to be here and learn more about the struggle of the nation that is the ancestral home to both Laurie’s family and mine.

Have a question or comment? Do you have a question about Ireland, her history, or a favorite memory of a visit you’ve made? We’re here for several more weeks at least. Post a comment.