Smoke Gets in My Eyes: A Backpacking Journey Around Mount Rainier 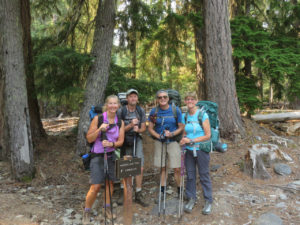 “Crystal Mountain is being evacuated because of fire. We might be next.”

We were mere hours into a ten-day backpacking trip on the Wonderland Trail around Mount Rainier, and it appeared that Mother Nature was ready to not throw us a curve ball, but to strike us out.

For months Laurie and I had been preparing for this amazing and challenging 93-mile hike that would take us to the foot of glaciers, up and down trails totaling 22,000 feet in elevation gain and loss, and through alpine meadows populated by marmots—and bears.

Along with our friends Kim and Trev, we had planned this hike for almost a year. Many days were spent on training hikes loaded with our gear or, on two to three-day backpacking trips. Our gear was tested, food stored at two caches on our route, and we were ready.

Now I was talking to a staff member at the Sunrise Lodge in the Northeast Corner of Mount Rainier National Park. She was telling me that our trip might be cut short because of park closures due to a forest fire in the area. 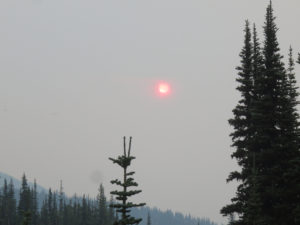 We’d gone to the lodge at Sunrise because it was less than a mile from our first campsite, and a final cooked meal was too much to resist. But the views of Rainier were obscured and the sun shone orange in the sky because of the smoke. We returned to our campsite, concerned, but ready to press ahead.

We left early the next morning on our counterclockwise route. The word of mouth on the trail was rife with rumors. But we pressed on for twelve miles to our next campsite at Dick Creek. On the trail, we ran into a young backpacker who was planning on a four-day Wonderland—but was headed straight into the area affected by smoke. We also met two young men who were running the Wonderland in three days, and would be met each night by the parents of one of the guys, a support crew with food and tents.

And we encountered our first bear.

Our route took us across the north part of the park, past rushing creeks, across log bridges, and through meadows filled with bushes loaded with tasty huckleberries. But the pall of smoke hung over us, and we soon confirmed that the east side of the park had closed, only hours after we departed. For days, we continued in hopes that by the time we reached the closed area, the fire would be under control and the trail would be open.

This was the most difficult physical challenge I’ve ever endured. Hiking the Camino across Spain took longer and the mileage was higher each day, but on this adventure, I was carrying a 30+ pound backpack. Instead of showers we bathed when we could in lakes or cold mountain streams. We carried, and cooked our own meals, and we gained and lost thousands of feet in elevation each day as we traversed canyons. 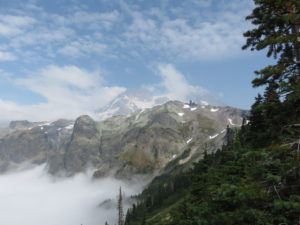 Eventually the weather changed. A few days with periods of light drizzle helped clear the skies so we had an unencumbered view of the mountain. We met up with the two young men on the three-day Wonderland Run on their last day. They had been rerouted, but were on the final leg of their adventure.

On day five we sat on the shores of Saint Andrews Lake with Kim and Trev, and listened to the sound of glaciers moving. It was so clear that I expected to look up at the mountain and see movement in the snow fields, but we only heard the rumbling sound echo on the slopes above us.

We were rewarded for our efforts on day seven when we stayed at the Paradise Inn on the south side of the park. We had a chance to shower, wash our clothing in a sink instead of a creek, and eat non-dehydrated meals. The east side was still closed but we were optimistic that by the time we reached the closed area in two days, it would be open.

That night, Kim came down with flu-like symptoms. She was in no condition to continue. Fortunately, they had parked their car at Paradise while ours was at White River—the start and end of our route. The next morning, we said our goodbyes, then Laurie and I trekked east toward the closed area. Kim rested up, and Trev went to the ranger station to see if there were updates on the closure.

Late that afternoon we arrived at a trailhead leading into the closed area. Trev had told us he’d leave us a note with the trail status in a prearranged area. His note was there—and it said the trail was open.

The next three days were a bit eerie. We were now traveling alone and for two nights had entire campgrounds to ourselves. On the second day, we saw a pair of day hikers, but no other backpackers. There were more elk tracks than boot prints.

We also encountered our second bear. 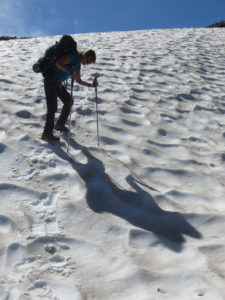 That day was also some of the most strenuous hiking. The eleven plus mile segment crossed nine snow fields, and because we were the first through that area for almost a week, the trail was difficult to find. Sometimes we followed elk tracks; on more than one occasion we made a wrong turn.

But on day ten we had an easy five-and-a-half-mile descent into the White River campground. Our dream of hiking the Wonderland was accomplished.

This story is too long to tell in a single post. Besides, I’m sure you want to hear about…the bear encounters. 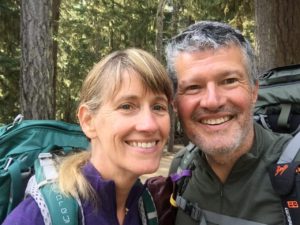 End of the Trail