The Queen of the Missions

“…in point of beauty, plan, and strength…there is not a presidio…that can compare with it.”
Father Morfi, 1777 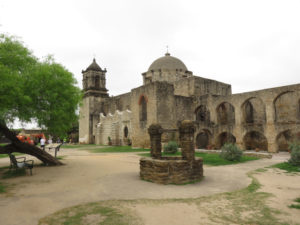 I expect that most people don’t even know that what is probably the most famous Spanish missions, was even originally a mission. But, I’m getting ahead of myself.

Laurie and I have visited our share of churches and missions across the world. But several things surprised us when we visited Mission San José y San Miguel de Aguayo located south of San Antonio. Known more commonly as Mission San José, this Spanish enclave dates to 1720.

First, we were surprised at the size. The church itself is beautiful but not particularly large. What is impressive is the size of the grounds. Spanish missions were more than a church—they were a community. Mission San Jose’ is a walled village which contained a granary, 84 two-room apartments, workshops, and other facilities for what was intended to be a self-sufficient Spanish community in the new world. 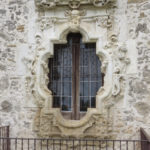 The Rose window in the mission church 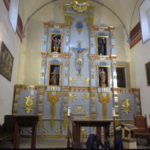 Inside the mission church

The second surprise was the scope. We knew that missions were built to convert Native Americans. We didn’t know that the intention was to eventually turn over ownership of each mission to the resident Indians.

The Coahuiltecan tribes that lived in the Mission San José area in the early 1700’s lived as hunter-gatherers. They were being crushed between raids from Lipan Apaches and European diseases that decimated their numbers. Becoming residents of the mission meant turning their back on their way of life to become Spanish subjects in almost every way, but also offered food and refuge. 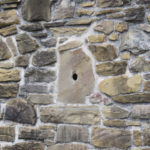 Gun port in the wall 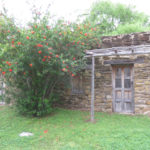 Three Indian bands came into the mission in 1720 and their leaders were appointed governor, judge, and sheriff of the fledgling community. By 1768 about 350 Indians resided in the mission where they farmed, kept livestock, worshiped, and protected the population. After 104 years Mission San José was turned over to a handful of remaining residents. After that it went through periods of neglect and restoration. Today it has been preserved as a National Park and the church is an active house of worship under the Franciscan order. Their Mariachi Mass every Sunday at noon, is bilingual, and popular. Sorry we missed it.

What happened to the Native Americans that lived in that mission? The video at the visitor center ends with a story of a woman talking to her daughter. She asks the young girl what happened to all the Mission Indians. The girl responds with, “Oh Mom, they’re all dead.” The mother tells her that they’re not, and to “No they’re not. Go look in the mirror.”*

While the grounds of Mission San José may be some of the best preserved of the new world Spanish Missions it’s not the most famous. That would be…The Alamo. 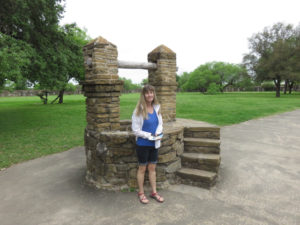 Laurie by an old well in Mission San Jose

Trip Update. After about two weeks in Texas we’ve moved on to Baton Rouge to stay with Scott and Debbie, friends from our days at Malmstrom AFB. We spent yesterday working at Habitat for Humanity here with a great group of college students from the University of Missouri. We’re here until Sunday. Then we move on to New Orleans.

*Quotes from the mother/daughter conversation in the visitor center video to the best of our recollection.