The Northwest Rival of Route 66 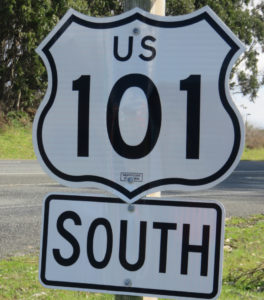 If the Pacific Northwest has its own version of Route 66, it’s Highway 101 along the coast of Washington and Oregon. We’ve driven to southern Oregon and California many times, but it’s always been down the speedy and semi-sterile I-5 corridor.

On Sunday, we joined U.S. Route 101 at Aberdeen, due west of Olympia, and have followed it to where it crosses the Columbia River to Astoria in Oregon, overnighted in Cannon Beach, and then down to North Bend near Coos Bay. Today we crossed over into California. What is normally a one, or at most, two-day journey, stretched into three.

Years ago, we lived in Morristown, New Jersey where they take pride in being able to say, “George Washington slept here. No, really—he did.” On Highway 101 one point of pride is the Lewis and Clark expedition. The adventurers reached their goal of the Pacific Ocean on the Washington side of the river. But they wintered on the Oregon side. Both states claim that the Voyage of Discovery ended in their state. 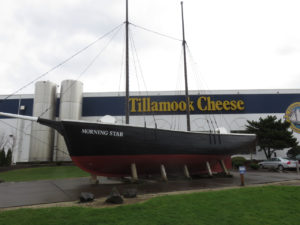 We aren’t lingering much on this leg of the journey as we want to reach warmer climes as soon as possible. But we did manage to stop at Fort Stevens State Park in Oregon where Laurie’s family spent many vacations. We walked the beach at Cannon Beach during a rare sunny spell, and even visited the Tillamook Cheese Factory. Lewis and Clark reportedly traded with the Tillamook Indians for whom the valley and cheese co-op are named. If the Indians had been making cheese back then like we tasted during our tour, the voyagers may have just stayed in the area. 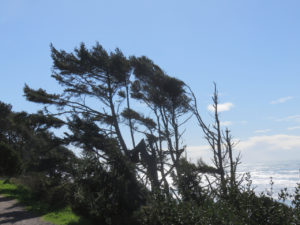 101 itself is mostly forested road. Moss and lichen covers many of the trees and even road signs. It winds through small towns and along cliff faces. The winds off the ocean have twisted some of the trees so they look like they’ve put their back to the sea and hunkered down just to survive.

Much of it is within sight of the Pacific which is stormy this time of the year. In the town of Depoe Bay waves crash against the rocks and up onto the highway. Many parts of the road are pastoral, flanked by cranberry bogs or pastureland with sheep grazing alongside newborn lambs. Elk herds are bedded down in several locations right along the road. 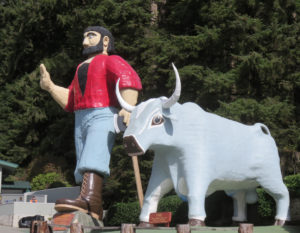 Paul Bunyan and Babe, his Blue Ox, Live on

Like Route 66, 101 seems like somewhat of a time capsule. I’ve spotted vintage Mobil Gas and Pepsi signs. Rail and street cars have been converted into restaurants. The road is quiet enough that there is an Oregon Coast Bike Route that shares much of it.

Even though we’re just passing through on this leg I can imagine returning with our bikes, kayak and backpacks to explore the coast in depth. But, it will be in better weather.

Our favorite book on Lewis and Clark is Stephen Ambrose’s Undaunted Courage: Meriwether Lewis, Thomas Jefferson, and the Opening of the American West.

We’re overnighting in Eureka, California. Tomorrow on to Healdsburg in the Sonoma Valley for at least two days to connect with friends, and sample a bit of vino.

Brookings, Oregon. An interesting historical tidbit about the only place on the U.S. mainland attacked by Japanese aircraft during WWII.