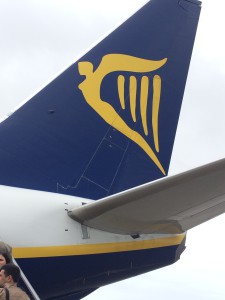 Got me a ticket on this flying bus

On Wednesday, we boarded a Ryanair 737-800 in Porto, Portugal bound for our new home near Dublin, Ireland. But before that moment we actually jumped through a series of hoops to make sure our low cost Ryanair ticket was truly, low cost.

Ryanair has a reputation for charging for extras—and even basics. According to some sources 20% of their revenue is through ancillary fees. For example, a bag that we could normally carry on in the states is oversized by Ryanair standards. The backpack that I carried across Spain on the Camino is oversized, Laurie’s is just within their carry on limits.

We hunted around Porto and found ourselves a new suitcase that meets Ryanair overhead compartment standards. Thanks to the kindness of our friends, Fred and Trish, who met us in Porto, we had a used suitcase that fit my backpack. We wedged my backpack and plenty of other gear into that suitcase, and then sucked up a baggage fee. The fee for the bag was basically like buying a third ticket.

We narrowly avoided a €150 (roughly $170!) charge that we would have incurred for not printing our own boarding pass. I checked in on-line but the fine print said to print your own copy of the boarding pass because we were from a non-European Union country. A minor problem as our printer is located across the ocean and we’re in a rental apartment without a printer. Fortunately, our landlord was able to print them for us and save us a hefty charge at the airport. 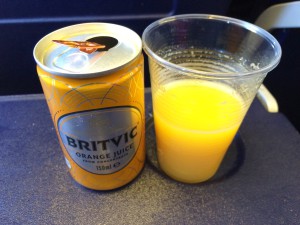 On board we each ordered an orange juice, normally a free drink, but they were two euros each. In Laurie’s words: “Never again.” My frugal wife won’t make that mistake twice. We might even buy extras in the airport and resell to other passengers.

And how they configure the aircraft to save money was ingenious: 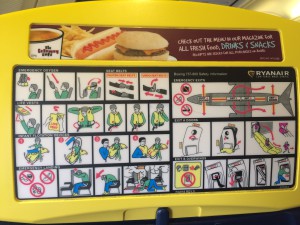 The seating area almost seemed designed to be hosed off between flights for quick cleaning and turnaround. The plane is setup to be a flying bus.

Rumors about pay toilets on board turned out to be a publicity stunt. However, I’m going to ask my brother who works at Boeing in 737 final production to keep an eye on the Ryanair planes rolling out of the factory. If that’s coming, I want to know before I’m stuck on a plane without the coin.

With all these concerns you must be asking yourself, “Why did you two get on a Ryanair flight?”

Frankly, it’s the money. When we researched options for moving from Porto to Dublin we looked at a combination of trains, ferries, and buses. The cost for that option: Hundreds of Euros—assuming no sleeper cars. The time needed to get there: Days

On Ryanair it was about two hours, and less than €100—even with a checked bag. Even with those two expensive orange juices.

For those kinds of savings, put me on that bus.

By the way, the bus we did catch from Dublin airport to our new home in Dundrum had reclining seats, leather ones. 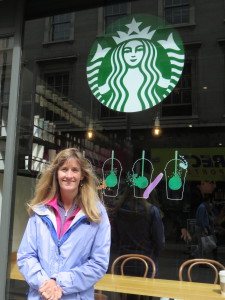 Laurie and one of the many Dublin area Starbucks

Travel Update: We have settled into our new home in Dundrum, a suburb of Dublin. We’re a block from the Luas light rail system that takes us into the heart of the capital city of the Republic of Ireland.

We had a slow start here because of a pesky intestinal bug that we picked up in Porto, but are now fully mobile and exploring both the nice community we now call home and Dublin proper. It’s nice to be able to speak the local language–almost. Laurie says she could listen to the lyrical Irish accent all day long.

The nights are long here—because we’re almost as far north as Ketchikan, Alaska. Dublin is actually located 53°20’ minutes north in latitude. Ketchikan is 53°21’ 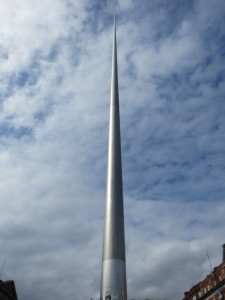 Quote on the Statue of Irish Hero, Jim Larkin