The Camino is Getting Crowded 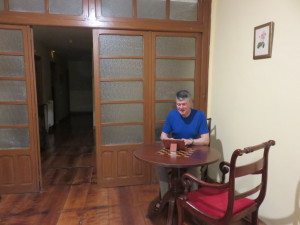 At work in Hemingway’s Hangout

Laurie continues to improve and we put in an 18 km day over terrain both beautiful, and rough. Our paths included paved road, concrete pathways, mud dotted with cow flop, and rocky paths that reminded us of Mount Rainier National Park. Unlike backpacking in Mount Rainier where we worried about bears, the most dangerous animal is the cow and it’s easy to find a place for a café con leche (coffee with milk) or a pastry. 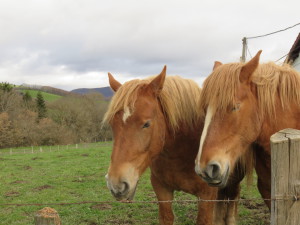 Today we met many more pilgrims than we have so far. We’ve talked to fellow peregrinos from Barcelona, Germany, New Zealand, Saskatchewan, and a pair of fellow Seattle area residents. We’re not the oldest, and certainly not the youngest out here.
Speaking of old, I was pulling on a pair of my Air Force issue gloves from my Malmstrom AFB days (circa 1986) and said, “I think these are the oldest things we have on this trip.”
Laurie replied, “Other than you dear.” 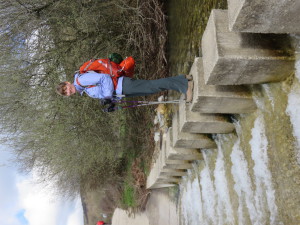 And after all the foot massages I’ve promised her on this trip.
We are spending our first night in an Albergue (pilgrim hostel) since Laurie is doing well. We share a room with six other trekkers. A chance to get to meet other people. It does mean I get the top bunk, and my earplugs may get tested if someone else snores. Or, I may give them cause to test out their own earplugs.