Posted by Dennis Brooke on Apr 9, 2016 in The Camino, Travel Tips, Travel Update | No Comments 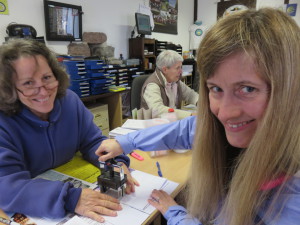 Laurie getting her credential stamped in St Jean 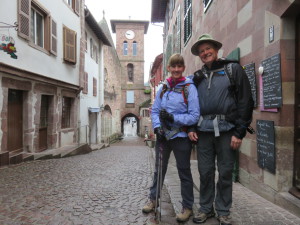 Setting out this morning from St Jean

Saturday, April 9. Valcarlos Spain
Laurie has recovered enough from her cold to put in a half day of hiking. We started our trek this morning out of the medieval village of St Jean Pied de Port. It was cool and overcast, and soon enough we were putting our rain gear to the test.
If Eskimos have thirty different words for snow, Seattleites have at least the same number for rain. Today it was mostly on the misting and spitting end of the range. God willing, we’ll avoid the Biblical Deluge end of the scale over the next 40 or so days.
On a training hike over a year ago we were using ponchos when the showers hit us. Our trousers and shoes were soon soaked through. We learned from that experience that breathable rain jackets (that can do double duty as light jackets) and rain pants were a better option for us. We also found shoes that are breathable, but water resistant.
This area of the Basque Country today reminds us very much of the Hunsruck, the area of Germany north of Ramstein where we were stationed from ’88-’91. It’s an area of steep hills, farmland, and charming villages.. We had been in Germany for about three weeks when one of us said, “If I see one more picturesque village, I’m going to throw up.”
No nausea so far—now we’re just soaking it in. 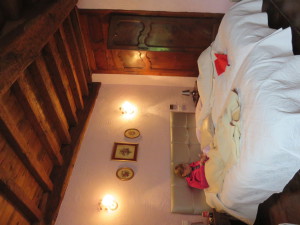 One of the other amazing things about this part of the world is the history. We spent our two nights in St Jean at Maison Errecaldia. It’s a B&B owned by Tim and Louise—expatriates from England. That building dates to the 1673s. They arranged for us to overnight at an inn in Valcarlos that dates to the 1500s. Both buildings are constructed using oak beams with stone walls about a meter thick. In Valcarlos the oak planked floor looks original. They’ve been polished by the feet of so many people over the centuries that the flooring has been shaped and worn slick. We think that it’s cool that I can trace my ancestors in Tacoma, Washington back to 1850. These places were two to three centuries old by then.
We encountered about two dozen other peregrinos (pilgrims) along the way. For a period we walked with a retired couple from Minnesota. They started their retirement a dozen years ago by climbing Mount Kilimanjaro. They made it sound like a great option for the future—just not the near future.
Our other notable encounter was a ram who trotted across his pasture and baa’d loudly as we passed by. I’m not sure if he was warning us to stay clear of his women or looking for a handout. Too bad we don’t speak Baa in Basque or any other language.
Today we hiked a very modest 12 km. Hopefully tomorrow we’ll be up to our normal range of 20 to 25. We still expect to be in Pamplona by early next week.