Posted by Dennis Brooke on May 12, 2017 in Travel Update, United States | 2 Comments

For a walk to do you any good, you ought to move along as though you mean it.
Harry Truman 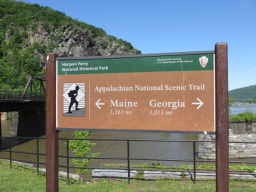 Much of our Journey Across America has been a chance to sample different places and activities. This week we chose to backpack a small section of the Appalachian Trail (A.T.) from Harpers Ferry, West Virginia.

The Appalachian Trail may be the longest hiking only* trail in the world. It stretches about 2200 miles from Springer Mountain in Georgia to Mount Katahdin in Maine. Bill Bryson’s book, A Walk in the Woods covers his Appalachian Trail experiences and the history of the route. The movie by the same name, starring Robert Redford and Nick Nolte, is a dramatization of the book—often reviled by true A.T. hikers who point out that the movie uses a grizzly bear (none-frequent the trail), the stars spend more time in towns then on the trail, and other inaccuracies. I think it’s a fun movie, if you keep in mind that it’s a dramatization—heavy on the drama.

We set off from Harpers Ferry, the “mental mid-point” of the trail and the headquarters of the Appalachian Trail Conservancy. It was in Harpers Ferry that the abolitionist John Brown helped spark the Civil War by capturing the local arsenal in hopes of inciting a slave uprising. The town has personal significance because John Brown was supposedly a relative of Laurie’s great-grandfather. Operative word: supposedly. 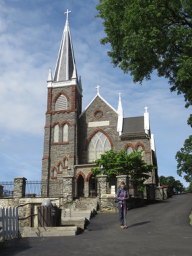 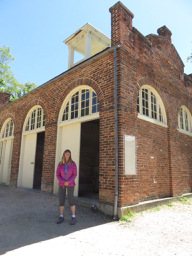 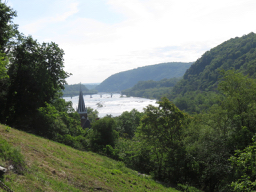 Potomac from the A.T.

The night before our start we stayed in the Teahorse Hostel in Harpers Ferry. This comfy place reminded us of our many days staying in Spanish albergues on the Camino de Santiago just last year. We met many more seasoned hikers including one who had started in Georgia—1000 miles to the south—on February 27, the same day we left on our own journey. Nicknamed, “Ant Man” this former Air Force C-130 mechanic was grinding out 25 miles on some days—nearly a marathon.

He talked to us about “Trail Angels” on one segment who volunteered to pick up hikers. One person took him and several other hikers into town so they could have a restaurant meal, and refused payment. He also showed us pics of an angel who had left a sign on Easter Sunday that treats were waiting in a shelter ahead. They found peeps, sodas, and other drinks left for hikers.

One thing that is unique about the trail is that most hikers earn a trail name. Ant Man was so named because he was small and fast. Another experienced hiker was called “44.” He had once been talking to an elderly person who asked how old he was. When he replied, “44” he was told, “A perfect age. You’ve lived half your life and most of your mistakes are behind you.

They also shared a joke about the difference between day hikers—those who are only out for a day; section hikers who are walking a section—and often plan to complete the trail over several years; and thru hikers who do the entire A.T. in a single season. If a day hiker sees some M&Ms on the trail the note them but walk on by. The section hiker will stop and eat them. The thru hiker eats them, and then searches the bushes for more. 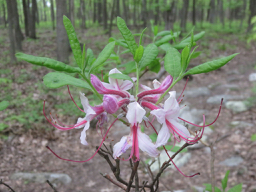 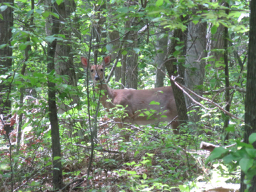 Our two day “section hike” covered the entire length of the Appalachian Trail in West Virginia. That might impress you, but keep in mind the A.T. covers only four miles in that state. We backpacked ten miles to the south into Virginia through some amazing weather and stayed at a campground occupied by a very nice group of 14 from the Gettysburg area and—one homeless hiker. 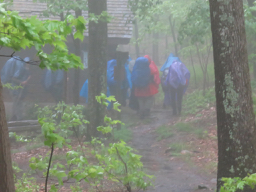 Gettysburg Group setting out in the rain

The Gettysburg group consisted of a wide range of ages, anchored by a potter, his wife, and their kids. The homeless hiker was a young man named Nick, who had left his home in the Philly area and was working his way south doing odd jobs and hitchhiking to try to meet up with a cousin in Georgia. He was a nice young man who had commented that until recently he hadn’t left the concrete jungle. He was woefully unprepared to survive on the A.T.

On our second morning, we packed up our tent just in time to escape a cloudburst and retreated to a shelter in the campground. Nick wasn’t so lucky. A lot of his equipment got wet. We talked to him and shared hot chocolate and some of our food. We hope we convinced him to head back to the road and hitchhike to a town where he could find work, rather than heading deeper into the trail. Fortunately, there was a good shelter where he could wait out the rain. 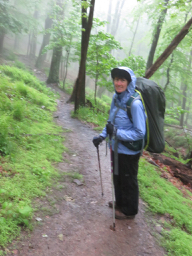 Our first day on the A.T. had been blessed by amazing weather. The second day was so wet that at times we thought we were hiking the Appalachian Canal. It was a good test of our rain gear—which needs some adjustments.

A good sample where we met many interesting people, and hopefully influenced at least one. We may return for more.

Trip Update. We’re overnighting in Gettysburg. Plan to see a few sights in the morning and then head to Easton, Pennsylvania to stay with friends John and Mary Anne.