Are You Smarter Than a Pocket Beagle?

The reason a dog has so many friends is that he wags his tail instead of his tongue.
Anonymous 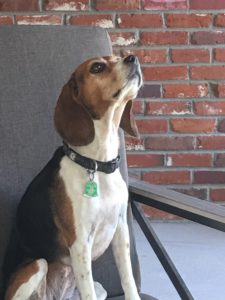 Do I smell a chocolate bar?

The best part of our trip has been reconnecting with friends we haven’t seen for decades. In some stays we’ve met nice, young adults that for some reason keep calling our friends names like, “Mom,” and “Dad.” When we last hung out with these people they either had no children or were juggling toddlers.

We also encounter their pets. Most are well behaved cats or dogs. But during a stay in Colorado I felt like we were on a reality TV show: Are You Smarter Than a Pocket Beagle? And the answer was, “No.”

We met our friends David and Melody decades ago when I helped recruit him to The Prudential in New Jersey. I later worked for him at a software company in Colorado Springs that was eventually absorbed into the Oracle juggernaut.

When they showed us the room for our stay (borrowed from one of those aforementioned young adults) they warned us that that Trixie, their adorable little pocket beagle, was an avowed thief who could open zippers. We’ve lived with rascally dogs before so we promised to securely close the door.

But the first night I went across the hall to brush my teeth and left the door open just a moment—I swear—just a moment. Laurie joined me in the room a few minutes later and said, “I think the dog is in here.” We quickly discovered that: 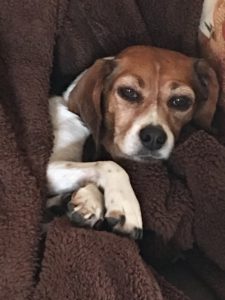 A break from mischief

We knew from previous experience that a dog can eat an ounce of chocolate per pound of body weight before it’s fatal, but that a less than deadly dose can also lead to vomiting and diarrhea in small dogs—and a sleepless night for the owner. (See this story: The Dog on Pogo Sticks.)

We didn’t sleep well that night due to worry, but fortunately, Trixie did. The next morning, she was wired like she’d had a couple cups of strong coffee, but her digestive tract was fine. And we knew that a zipper was no barrier in the game of “Are You Smarter Than a Pocket Beagle?”

The next day the dog periodically lurked outside our door. And when it was accidentally left open, she struck again. A package of Pepto-Bismol tablets, a half bag of cough drops, and various items from our toilet kit were ingested or ravaged. Round Two: Pocket Beagle, 1; Us, 0.

After that we started putting attractive targets in my suitcase which had a built-in lock, under the assumption that if she could manipulate a combination it would take her too long to go through the 1000 possible options. That worked—but on another occasion of an opened door she did manage to retrieve a packet of Kleenex from Laurie’s backpack. Fortunately, she caught Trixie as she was retreating with her newly found treasure, before she ate or shredded it. We’ll call round three a draw. 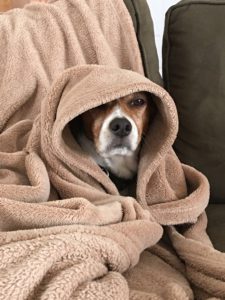 It is tough to be angry with somebody so cute, and I’m sure she uses that to her advantage. Let’s just say that if we ever play that game again well have motion sensing alarms to even the playing field. But in that match it was Trixie, 2; Us, 0, and one draw. 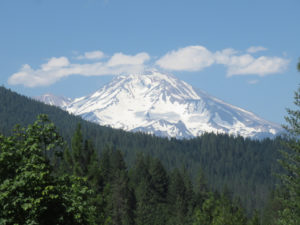 Trip Update. The compass on the car indicates we’re heading north. I’m writing this from a campsite near the banks of the Sacramento River in the shadow of Mount Shasta. Even though Laurie and I have spent most of our lives in the Pacific Northwest we’ve never visited Crater Lake. We’re planning on camping two nights near there to explore that amazing place.