Pilgrims First, Tourists When we Can

Posted by Dennis Brooke on Apr 23, 2016 in Tall Tales, The Camino, Travel Update | No Comments 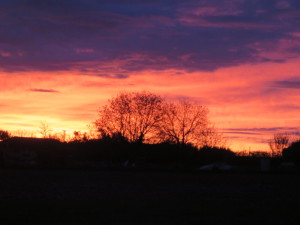 Sunrise over the Rioja Region, Spain

Today is one of those days where we’re grateful we tested our clothing in rainy conditions. We started off in the predawn darkness in an effort to beat the rain forecasted for the early afternoon. We were rewarded with a view of the first sunrise we’ve seen over Spain. And when the rain came, we were glad that our gear held.
Most of our days are taken up with walking, eating, more walking, washing our clothes, and other tasks required of those who live by walking. But for several days, we also got to play tourist.
In the town of Najera (Wednesday, April 20) we visited a monastery that contained the tombs of Kings and Queen that once governed this region. In their day they were rulers—now they’re dust and bones in stone crypts. 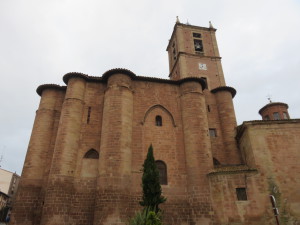 Monastery in Najare-Tomb of Spanish Kings and Queens

On Thursday the 21st we arrived in the cathedral in the town of Santo Domingo. This is a famous stop on the Camino—because of the legend of the innocent pilgrim. The Camino thrives on legends, including the one that the apostle James (the brother of John, the last apostle) is buried in Santiago. That legend inspired the whole Camino pilgrimage. 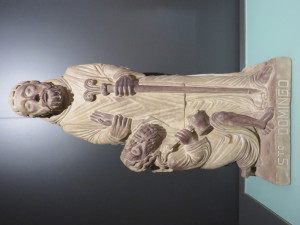 In Santo Domingo there is a legend of a German family that was walking the Camino when an innkeepers daughter tried to seduce the son of the couple. Being an upstanding lad, he refused. Being a woman scorned, she planted silver in his pack and when they were on the road she turned him in for theft. The innocent pilgrim boy was hanged.

His parents completed their pilgrimage but when passing back through Santo Domingo they found their son still hanging, but miraculously alive. He claimed that the local patron saint, Santo Domingo had kept him alive. When the parents reported this to the mayor he said, “Your son is no more alive than my chicken dinner.” At this point the roasted fowl on his plate sprouted feathers and jumped up and began cackling.

Far fetched? Yes, but the story has inspired the cathedral to keep live chickens in a special coop since at least 1350. 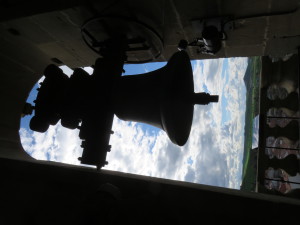 We toured the cathedral and its magnificent art collection, viewed the current resident rooster and hen, and managed to be in the clock tower for the ringing of the bells at 5:00 pm. (See the video below. I have the camera on its side for part of the video and there is wind background noise, but our timing was great.)
Pilgrims first, but it is nice to squeeze in some tourist activities.