On the Road Again

Posted by Dennis Brooke on Feb 27, 2017 in Preparation, United States | One Comment

On the road again
Just can’t wait to get on the road again
The life I love is making music with my friends
…
Goin’ places that I’ve never seen
Seein’ things that I may never see again
Johnny Cash, Willie Nelson 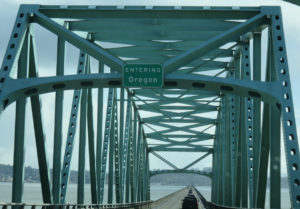 We’ve had a great hiatus from our travels. We’ve been staying with my parents since mid-October but are now on the road again. For the next four and a half months we’ll basically follow the perimeter of the United States counterclockwise in our Subaru—we’re not RV people—camping, staying with friends, or staying in hotels and Airbnb rentals. Our goal is people and scenery over speed.

Frankly, in some respects, packing for The Camino de Santiago to hike across Spain was easier. For that adventure, we knew that we could only take what we could carry on our backs. Over the past few weeks we’ve culled gear but the back compartment of the Subaru is packed to maximum density. We had to leave behind some bicycle gear and swim fins, but managed to keep our backpacks. I expect that we’ll be shedding some cool weather clothing as we head south. 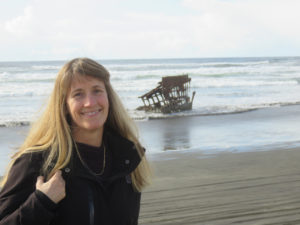 Laurie and the wreck of the Peter Iredale, Fort Stevens

This trip is more planned than our European trek because we’ll be meeting up with friends and in the other Washington must make tour arrangements weeks in advance. But we have left in plenty of time for side trips and easy days.

It has been great to reconnect with friends and family, help out and do volunteer work in a few different places, and sleep in the same bed for four plus months. But frankly, it’s time to see this great country, see friends we haven’t seen in decades, and explore both popular and out of the way places.

Thanks to those of you who have given us some great tips about places to see, stay, and eat, on our American adventure. We hope that we inspire you to live your own dreams. 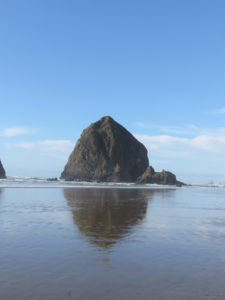 We left Auburn, just south of Seattle, and made it to Cannon Beach, Oregon this afternoon. We drove through fickle weather that included driving rain, sleet, and sunny skies. We visited Fort Stevens park where Laurie spent many childhood vacations. Also walked on Cannon Beach where Haystack Rock towers 235 feet over the sand. Cannon Beach is named for…the cannon that washed ashore from the USS Shark, a schooner that shipwrecked off the area in 1846.

Recommendations. At Fort Stevens be sure to check out what’s left of the Peter Iredale on shipwreck beach. In Cannon Beach we enjoyed a drink and a snack at the most unusually named Cannon Beach Hardware and Public House. Right next door we had dinner at The Irish Table with a very interesting couple we met on the front porch. Excellent Dungeness crab salad, Irish Soda Bread, and potato leek soup. Of course, walk out to Haystack Rock. Just don’t try to pump your own gas.

If you’re new to this blog we’re a couple who retired in the Winter of 2016 and now spend most of our time living a houseless, not homeless, lifestyle. Laurie spent nearly 21 years at Starbucks headquarters in accounting and IT. I (Dennis) spent seven and a half years as an Air Force officer and retired from IT management. Am now a novelist and now get to write about our travels and teach storytelling.