An Oasis in the Desert

Posted by Dennis Brooke on Nov 9, 2017 in Backpacking, United States | One Comment

…I took the one less traveled by, and that has made all the difference.
Robert Frost One of the most beautiful places in the United States is accessed via one of the most remote towns in the lower 48. The destination is even more special because of its isolation.

Supai, the capital of the Havasupai Indian Reservation is, located at the end of the eight-mile Havasupai Trail. To reach the trailhead you turn north off Route 66 and travel an hour and a half on a two-lane road frequented by elk, loose horses, and deer.

The town is the gateway to a series of incomparable waterfalls. The path to it can only be traveled by horses, mules, or as in our case, on foot. The only other way to the village is by helicopter. In late October, Laurie and I hiked to Supai with our friends Kim, Trev, and Mary. We descended two thousand feet through sandstone canyons shaped by eons of erosion. The dusty trail is frequented by pack trains of horses and mules carrying the mail—including Amazon Prime packages—and supplies down to the village of 500. The route to Supai itself is as beautiful as many of the locations we saw in the Grand Canyon. The village is home to an elementary school, two small stores, a pair of churches, and a café. The streets are rock and packed dirt covered with a fine dust, the consistency of talcum powder. Because there’s no road access residents use horses or small off-road utility vehicles to get around the town. One of the young women who worked at the café told me that middle and high school students travel by helicopter each week to boarding schools outside the canyon.

We spent the night at the village lodge before heading to our destination—two amazing water falls located further down the canyon. Havasu means blue-green water. A high concentration of calcium-carbonate in the water creates the amazing hue. Kim, the first of our party to reach the overlook for Havasu Falls said, “It takes my breath away.” I responded with a less articulate, “Wow.” Looking down on Havasu Falls

After lingering at the falls, we traveled two miles down the canyon and through the campgrounds to Mooney Falls. The pool at the base of Havasu Falls is accessible via a footpath, but the route to the base of Mooney Falls requires descending 200 feet down a footpath, through two narrow tunnels, and down a rocky cliff face made slick by spray. The final descent uses chains and rickety wooden ladders. There’s a reason that a sign at the top warns, “Descend at Own Risk.” The fall itself is named for a miner who died in 1882 trying to rescue an injured friend. He fell to his death while attempting to climb to the top of the falls with his companion strapped on his back. 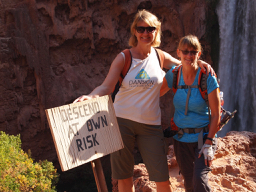 Descend at own risk 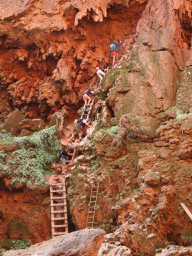 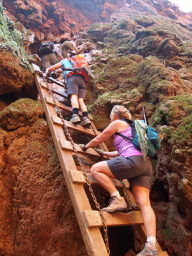 We dared the climb to the bottom—and questioned our sanity during the final phase. But it’s a one-way path. The final ladder was only loosely connected to the rock, but we made it to the base safely.

We explored the travertine formations and pool at the base of Mooney Falls. The other four in our group took time out to play a board game called Rummikub at a picnic table located in six inches of water at the edge of a pool. They suffer a mild addiction to the diversion. 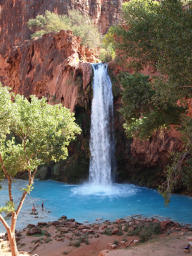 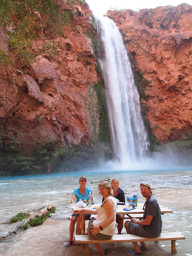 Fortunately, scaling the cliff was much easier than the descent. It was a relief to be safely back on top looking down at the aqua waters 200 feet below. At the trailhead, we met up with Mary’s husband Curt, who had the group SUV and returned us to civilization. Frankly, I wish we could have lingered longer in our desert oasis. NOTES: To access the canyon and falls requires reservations from the tribe for either the campgrounds or the lodge. Day hikes to the falls without a permit are not allowed.