Posted by Dennis Brooke on Apr 14, 2016 in The Camino, Travel Update | No Comments

“Pamplona is calling.”
Yoost in the movie, “The Way” 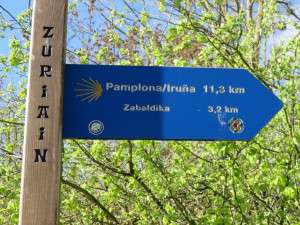 We walked here on Wednesday under blue Basque skies that rival those of our native Seattle. It wound up being about 22 km; two more than planned due to detours—one planned, one unplanned. Yes, I missed a turn.
We (especially me) are learning to “throttle back.” If you expect every store to be open, fast service, and urgency, don’t come here. But if you’re willing to adjust it can be a great experience. The other day Laurie did her bit to defuse an impatient peregrino at a restaurant in Valcarlos by suggesting it was worth the wait.
We arrived in Pamplona with tired feet, and fortunately, no blisters. Walked part of the way with a fellow perigrina from Holland whom we later encountered at a café in Plaza del Castillo, the main square. She was able to save up two months of vacation to make the walk. She was asking us about the movie “The Way” which she heard inspired many Americans. We suggested she see it in part because one of her countrymen was a key character. 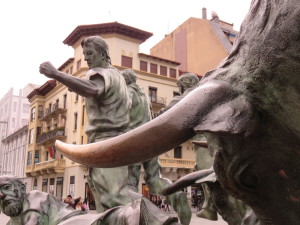 Monument to the Encierro (Bull Run)

Pamplona without bulls is like New Orleans without Mardi Gras: both have plenty of excitement without the holiday they’re noted for. Most of the people here speak great English but apologize for their limitations. If I spoke Spanish as well as they spoke English, I’d be ecstatic. 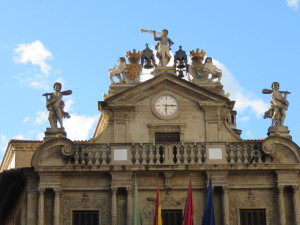 The local pharmacy was especially helpful. They filled a prescription for Laurie and pointed us to a cheaper store to get sunscreen.
This morning we went to daily mass at the Cathedral. One other peregrino joined us and about a dozen locals in a small, beautifully decorated, side chapel—complete with an organ. Most of the mass was sung in a musical chant rather than recited. It was a great way to step back and remember our purpose, and take a break from the tourist route. 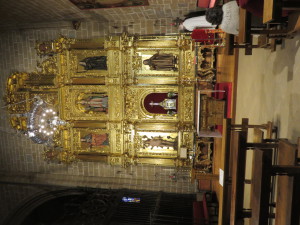 Chapel in the Cathedral (Pamplona)

We were told by a perigrino couple from Adelaide that the bars near the square have great deals on Pintxos (Basuqe Tapas) on Thursday night. Sounds like a great way to end a relaxing day.
Tomorrow we continue west where we expect to encounter a famous wrought iron sculpture of medieval pilgrims and stop at a 12th century church associated with the Knights Templar, which has a reputation as being one of the “jewels of the Camino. We’ll stop, when we’ve had enough for the day. 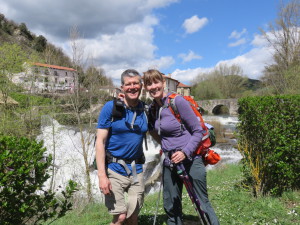 Pause in front of the falls in Arre 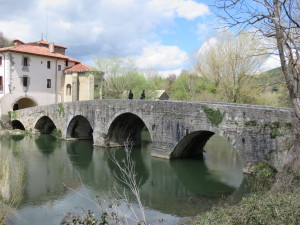