In Search of Lobster

[Maine] is the exact opposite of New York. When you walk through my small town to get a cup of coffee, you bump into five people you know.
Elizabeth Strout

When Maine is mentioned, I think of moose, cold winters, L.L. Bean, and Stephen King. Laurie thinks of—lobster. She had a short list of must-do items on this journey and one of them was lobster in the farthest northeast state.

Thanks to a tip from my friend Andrew, we wound up in Rockland, Maine, the self-proclaimed “Lobster Capital of the World.” We found a great Airbnb just a few blocks from downtown. The flat, town, and friendly people, reminded us of the Isle of Wight. Plus we left behind the competition-sport driving style of New Jersey and Massachusetts for the more relaxed pace of Maine. 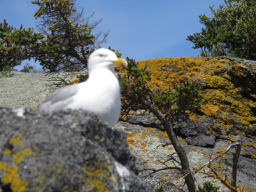 Rockland itself is a small place of less than 8,000 people. It’s a great place to take things in at a moderate pace. The local theater built in 1923 shows a mix of first run movies, live shows, and older movies. We saw Gifted—highly recommend it. We visited Project Puffin on main street and watched a great video of how they’ve reintroduced these birds to the local islands. Let’s face it, who can’t love a bird that looks like a cross between a penguin and a toucan. Rockland also has the Farnsworth Art Museum featuring the work of Andrew Wyeth and other Maine notables. 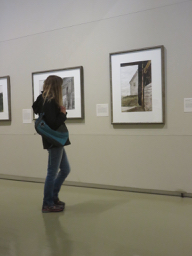 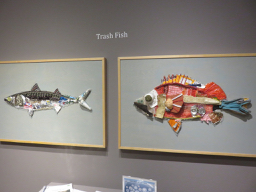 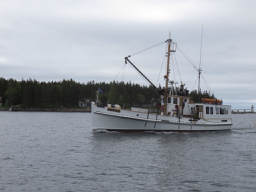 We took advantage of ferries to visit two local islands. Vinalhaven is a short ferry ride from the Rockland Harbor. It was a great place for a walk. However, even on Memorial Day we were a bit early in the season and many places were not open for lunch. A longer boat ride a few days later took us to Monhegan island, discovered over 400 years ago by the explorer John Smith. The island has no paved roads and no cars. Even though the year-round population is less than 100—it still sports a brewery and a thriving B&B industry. It also has lots of hiking trails. We lucked out with great weather for our walk. 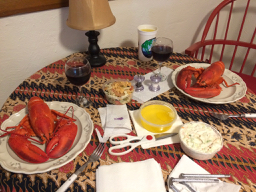 And of course, in our four days we made sure Laurie had plenty of chance to partake of her favorite crustacean. Lobster rolls—unknown to us—are a Maine staple. It’s basically lobster meat soaked in butter and served on a roll. One night we picked up two lobster and sides from the Keag General Store in nearby South Thomaston for less than $25 for the two of us. Laurie is now very fond of Maine takeout. And on the way out of Maine a rest area was serving lobster bisque. Only in Maine.

When we lived in Glasgow, Scotland last year we learned that their motto “It’s the people” was much more than a motto. We found the same is true of Maine. 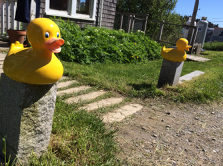 For my Sila team (Monhegan Island)

Trip Update. We’re currently in Ohio and expect to be in Kentucky tomorrow where we’ll meet up with our Camino friends, Beth and Jerry. After Maine we headed west for the first time in three months. I don’t think we’ve seen a Washington license plate since Arizona.

And thanks for the great tips on Maine, Andrew. We’ve learned it always pays to listen to the locals.