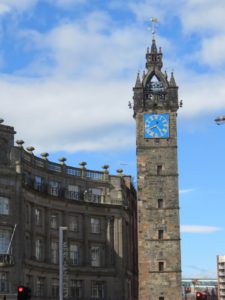 Years ago Laurie and I were in Manhattan trying to locate the New York Public Library. We’d heard about the amazing architecture and reading rooms and wanted to check the place out. The library appears in films ranging from Breakfast at Tiffany’s to Ghostbusters.

This was before the days when my cell phone could direct me to the spot. Using a map, I reached what I thought was the general vicinity but wasn’t quite sure where it was.

I went up to a street hot dog vendor and politely asked, “Can you tell me where the New York Public Library is?”

At that moment I glanced over his shoulder and spotted the words on the archway of the big, marble building behind him: The New York Public Library. The two iconic lions that guard the entrance were unmistakable. 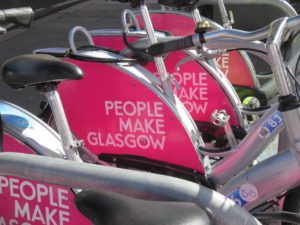 On the other hand, the people of Glasgow make this city a welcoming place. In fact, three years ago the city rolled out a new brand: “People Make Glasgow.” In our opinion, it’s more than a motto. The people have been friendly, helpful, and humorous.

Early in our stay we standing on a local street corner trying to puzzle out the bus service that replaced the local subway during some modernization work. A man in a business suit stopped and explained the system and costs. I bet he would have told me where the New York Public Library was.

They’re also patient. Without my glasses I sometimes misread British coins. I once dropped a ten pence piece into the bus fare box, when it required a full British Pound—ten times what I gave him. He joked with me, “That’s only ten pence. For that I can only take you a block.” 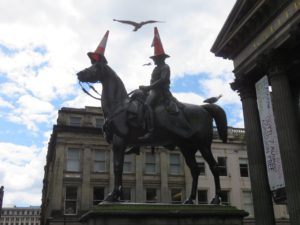 Glaswegians also have a great sense of humor, or as they would spell it, “humour”. In front of their Museum of Modern Art is an equestrian statue of the Duke of Wellington. Defeating Napoleon at Waterloo hasn’t spared the duke’s likeness from sporting a traffic cone placed by mischievous Glasgow residents since the early ‘80’s. In 2013 the city council, annoyed at the £10,000 annual cost of removing cones considered measures including doubling the height of the plinth on which the statue rests.

A “Keep the Cone” Facebook page gathered over 72,000 likes within 24 hours. Glaswegians like their Duke Conehead. Coffee mugs and other trinkets feature the statue, with the traffic cone. The council appears to have adapted. When we were there the Duke’s horse was also wearing a matching cone. And in the city council chambers we saw an advertisement for new high speed broadband using a graphic of the Wellington statue, complete with cone. 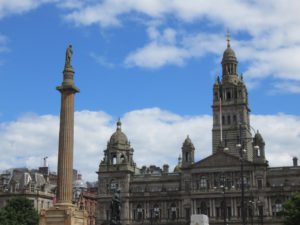 There’s another reason that Americans should like the people of Glasgow, related to George Square in the city center. The square was named after King George III who waged war in an attempt to keep America in the colonial fold. Originally a statue of the king was supposed to grace the square, but his popularity among the citizens dropped as his war interfered with the profitable tobacco trade with the thirteen colonies. His bouts of madness didn’t help either. So instead of a statue of the king, they erected one of Edinburgh native, Sir Walter Scott. 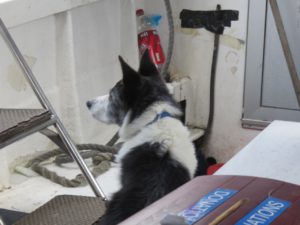 “First Mate” on a passenger ferry

The people of Glasgow also seem to be compassionate. There is a population of homeless people living on the streets. Several times we’ve seen people crouch down to talk to a panhandler sitting on the sidewalk. We get the sense that they are trying to help them, without giving a direct handout. If I get the chance to ask one of these people about what they’re doing, I’ll report back in a future post. I suspect they work with a ministry or government agency. 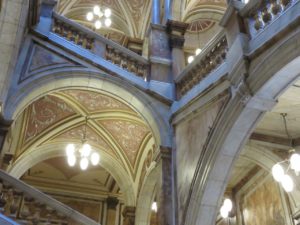 The architecture of the city is also fascinating. The Glasgow City Chambers boast of the longest marble staircase in the world—even larger than the Vatican’s. The Lighthouse, part of the former offices of the Glasgow Herald, is now Scotland’s Center for Design and Architecture. The city is a mix of classic and modern. In the week-and-a-half we’ve been here we’ve only scratched the surface. 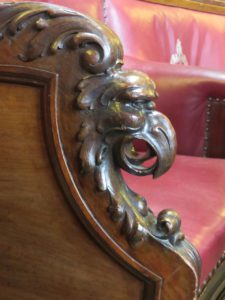 And if you’re a Doctor Who fan, Glasgow actor Peter Capaldi is the twelfth and current incarnation of the Time Lord. They have a whole page dedicated to Whovian Glasgow

There are some things we find a bit odd. Early in our stay we took in a professional football (soccer, to Americans) match at the stadium near our flat. When we’re at a game in the United States the crowd tends to yell and cheer. I often go hoarse when watching American Football games in person. But here, they tend to clap rather than cheer. I wonder if it has anything to do with the fact that they don’t serve beer in the stadium. 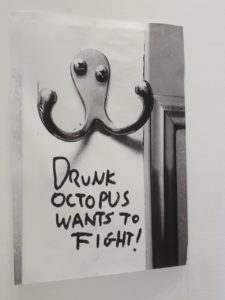 Best pic in the Museum of Modern Art

And then there’s their taste in drink, specifically, Irn-Bru (pronounced “iron brew”), a carbonated, bright orange soft drink. In Scotland, it actually outsells Coca Cola, one of the few places where Coke doesn’t reign as number one.

We tried it. We tried haggis. We like haggis. But Irn-Bru? Laurie thinks it tastes like a mix of bubble gum and orange soda.

In short, the people do “make” Glasgow. And they’ve made it a great stay in our travels. 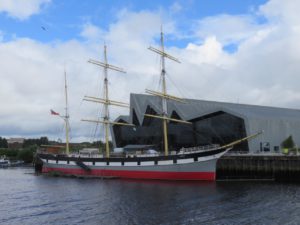 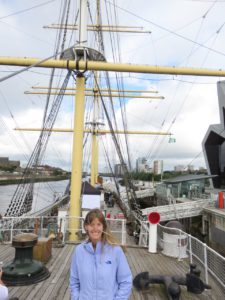 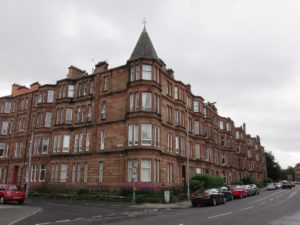 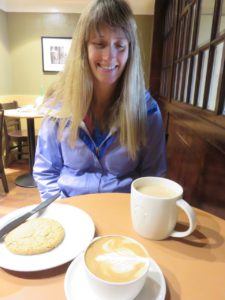