In the Footsteps of Hemingway 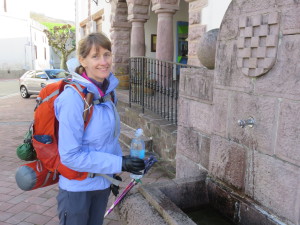 Starting out from Valcarlos

I’m writing this in a salon on the second story of Hostal Burguete, a hotel favored by Ernest Hemingway when he visited this village. In Spain he’s most associated with Pamplona, which is two days walk from here. But he did spend time here writing, relaxing, and catching trout in the local streams. In fact, he has scenes in The Sun Also Rises where characters stay in this same Hostal and dine in the attached restaurant
Today was only our second day of hiking. Saturday night in Valcaros was rough for Laurie. Her head cold took a bad turn and she developed an infection. We expected to take a taxi to a larger city to see a doctor, but our innkeeper called the local doctor who saw her at 8:00 am on a Sunday morning. Antibiotics, painkillers, and a day of mostly bed rest put her in shape for a 18 km hike here to Hemingway’s hangout. Valcarlos is so small that as we were leaving this morning we ran into the doctor and were able to give him an update on her state. 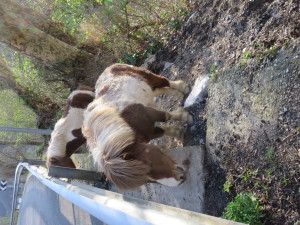 The trail out of Valcarlos follows the local highway for about 3 km. Shortly after leaving town we encountered two Basque ponies standing next to a guard rail. (See picture) They’re about the size of Shetlands and looked like they had been standing there for awhile, figuring out how they were going to get over and across the road. The hillside behind them was steep and covered with brush. I imagined a conversation between them:
“How are we going to get across this guard rail?”
“I don’t know, how do you think we should get across.”
“I asked you first.”
I hope they’re not still there. I understand there is a market for wild pony meat in this area..
Most of our route today was through scenic river valleys on paths that reminded us of our hike last summer on one third of the Wonderland Trail around Mount Rainier—complete with blackberry vines. The big difference is, of course, the small villages we pass through and the European road signs.
Although it was a sunny day the hike had some real challenges. We started at 300 meters in elevation in Valcarlos and climbed all the 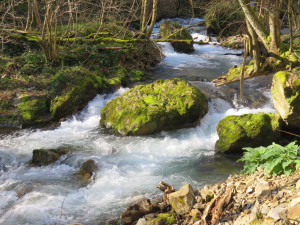 way to 1055 meters to cross the Pyrenees at Puerto Ibaneta. At that point the wind was blowing so hard it almost knocked Laurie over. We waited till it died down and crossed into a river valley where there was more shelter from the wind.
On our way we talked to a number of other pilgrims from Australia, Canada, and the US. One couple was turning back after only a day because she was having shoe problems. Makes me glad we did lots of training and gear testing.

Laurie is still getting over her cold but is up to another day of hiking. We plan on going about 18 km to Zubiri. We may have our first stay in an Alburgue (Pilgrim Hostel), if Laurie continues to improve. Up to now we’ve staying in private rooms at hotels or B&Bs to help her recover.
As far as Ernest Hemingway goes, I admire his skill, output, and creativity. But in one element I’m not going to follow in his footsteps—one wife is enough for me.

Thanks to everyone for the birthday wishes. It has to be the most unique one I’ve ever had.