In Search of the Mythical Red Squirrel 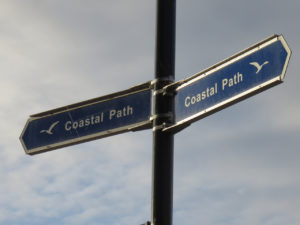 Among the many things the Isle of Wight is noted for are extensive hiking trails and a cute little redhead—the native red squirrel. Laurie and I decided that we would explore our home for the month of September by hiking the 67-mile-long coastal path that circumnavigates the isle, and at the same time try to spot the elusive red squirrel.

Granted, squirrel sightings in the USA are nothing unusual. The grey squirrel native to our country is easy to find and will often eat out of your hand. But the red squirrel of the British Isles is shy and on the decline—in part because their invading grey American cousins are twice their size, brutish, and carry a squirrel pox fatal to the local breed. The Isle of Wight itself is grey squirrel free. They even have a hotline so if one is spotted the authorities can…deal with the Yankee intruders. 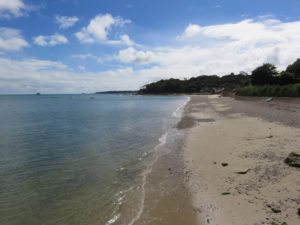 After many days of hiking and no sightings of any type of squirrel we wondered if the red squirrel was a joke the locals played on rube visitors. A mythical beast like Bigfoot in our Pacific Northwest or the jackalope in the American west.

The hike around the island was a great experience. Unlike the Camino where we carried our possessions on our backs and stayed overnight at albergues (Spanish hostels) we started each day at our flat in Ventnor on the southern edge of the isle. Other than the two sections that began and ended in our home base, we would catch buses to our starting point and then back to our village after the trek for the day. It meant packing light for eight to fourteen-mile day hikes. We often split, or ended, the hike with a lunch at an inn, including one that is a sixteenth century smugglers pub. 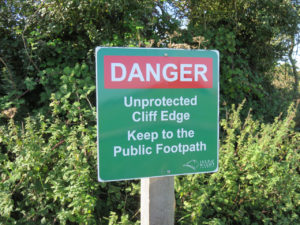 Many segments of our path took us along the edge of eroding cliffs. The sea is having its way with some parts of the coastline and we found buildings, fences, and roads giving into erosion. One sidewalk ended in a drop onto a beach far below. The only thing separating us from the cliff edge in most cases was a warning sign.

The Isle of Wight used to be connected to the mainland as recently as six thousand years ago. If this keeps up, it will be the Reef of Wight. 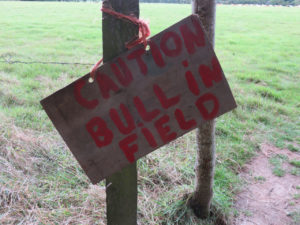 Another danger was more immediate—cows. Many of the paths are through pastures. More than once I wasn’t paying attention and my shoe became intimately acquainted with cow leavings. Laurie managed to avoid it. And on one day we entered a field where a sign was posted: “Danger, Bull in Field.” We crossed the field without an encounter. I did ensure that I didn’t look too long at any of the cows to avoid making him jealous.

Exploring the isle on foot led us along the shore, through villages and woodlands, and past amazing sights. We stopped at a 12th Century Church, a monument dedicated to the poet Alfred, Lord Tennyson, and split a lobster salad to celebrate one particular segment. We chatted with other visitors and residents, and picked wild blackberries to make ourselves a cobbler. 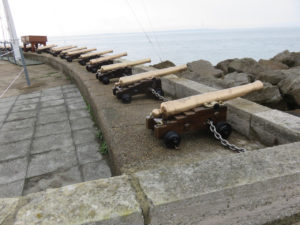 Cannons at the ready–in Cowes

And for six days, we saw signs about red squirrels, talked to people who swore they had just seen one, and saw–not a one. We thought we were doomed to leave the island without a sighting.

But on our very last day, less than two miles from our flat and the completion of our trek, Laurie spotted what she thought was a bird with a white breast up in a tree. As she watched she realized it not a bird. I finally spotted it and we confirmed that the tuft eared rodent was indeed, the not-so-mythical red squirrel. They’re not only shy but very un-photogenic. This one didn’t stick around for a picture. You’ll have to take our word for it, they do exist.

English Terms related to Hiking on The Isle of Wight 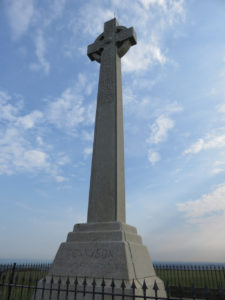 Chine. A deep narrow ravine. This definition of the word is unique to the Isle of Wight and Dorset. Since most chines are on the coast it usually meant a detour for us.

Down. A gently rolling hill. What Americans would call a hill as in, Capitol Hill, they would call a down. Not to be mistaken with the football term.

Stile. An arrangement of tricky steps that people can negotiate, but not livestock. Maybe tricky livestock.

Groynes. An artificial barrier, usually made of rock or wood, that extend straight out from a beach to limit erosion and the movement of sand. Used to hold up signs that say “Keep off the Groyne” that are universally ignored.

Close. A residential street without through access. Much fancier than calling it a dead end. 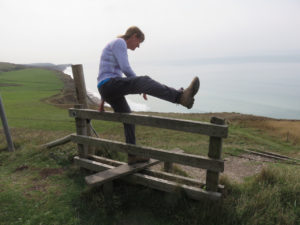 Laurie negotiating a stile to cross a fence

Warren. An area of land set aside for breeding game, especially rabbits. But rabbits seem to be equally at home breeding on downs, cliffs, and any other location on the Isle of Wight. 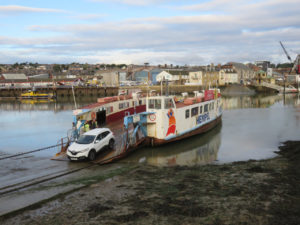 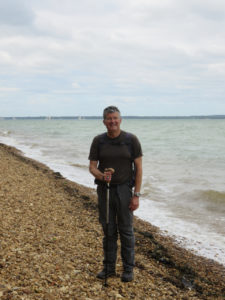 Dennis on most coastal section of the path 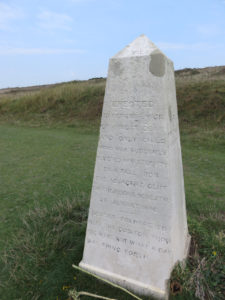 A monument to a fatality off a cliff edge 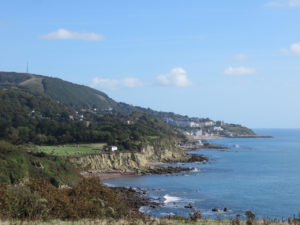 View from the path