Building a Ladder out from Poverty

“A Hand Up, Not a Hand Out.”
Anonymous

Discussion on a Habitat for Humanity site:
Me (Dennis): “Have you talked to anyone interesting?”
Laurie: “They’re all interesting.” 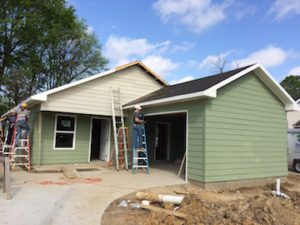 Habitat for Humanity is one of our favorite organizations. This international charity helps people lift themselves out of poverty by partnering with them to build or renovate homes and teach them skills to be successful homeowners.

Laurie and I have worked with Habitat for Humanity near our Tacoma home many times. On our Journey Across America we participated in builds in both Baton Rouge and New Orleans, Louisiana. Both communities have been hard hit and Habitat is making a difference.

Baton Rouge. Last August, the city of Baton Rouge was hit by flooding that killed 13 people and damaged or destroyed 60,000 homes. As you drive through neighborhoods you can still see piles of drywall and other trash in front of homes that had to be mucked out.

We joined a group of students from the University of Missouri’s Newman Catholic Center who were spending their spring break working with Habitat. Led by the site leader, Nelson, we painted, roofed, and installed trim and siding. I even went up on the roof with Nelson and one of the students where we—carefully—laid down tar paper to protect the building from impending rain. Nelson joked that he and I were acting like we were still in our twenties.

It was fun talking to the students about their dreams and plans. Angelle, their director, is a New Orleans native, who relocated to Missouri with her fiancée shortly after Hurricane Katrina. 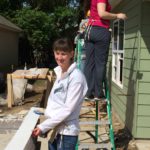 Laurie at work in Baton Rouge 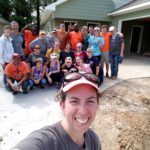 We were inspired by how these young people were giving up their spring break to help this community rebuild. We were also amused when an ice cream truck drove by and one of the young women exclaimed, “Oh my gosh, I’ve never seen one of those in real life.”

Both of us noted how nice the students were not just to us, but to each other. Great examples of faith in action.

New Orleans is still recovering from Hurricane Katrina and other storms. We joined a very different group of volunteers on the building site at that city. Many were retirees that had come to the Crescent City specifically to work with Habitat. One group of four fellow Seattleites came through the RHINO (Rebuilding Hope in New Orleans) ministry which hosts volunteers who want to help rebuild the city. Some of them had been coming to New Orleans for 11 years through RHINO.

At this site, we had a chance to work with a young couple who were Habitat Partners—putting in sweat equity toward the day when they would become homeowners through the program. He is an aspiring musician who came to New Orleans to “get schooled” and now makes a living through his passion. 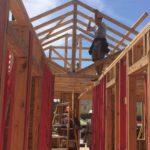 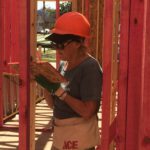 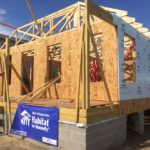 We started the day with a framed house that had no roof and part of the exterior wall installed. By the end of the day, under the guidance of Hans, our site leader, and Gabe, an AmeriCorps volunteer, it had the shape of a house, complete with roof trusses. Eventually it will be a modest home for a single mother who is working to lift herself and her family out of poverty.

How You Can Help. Habitat for Humanity takes volunteers and puts them to work under the supervision of skilled tradesman. You don’t have to be handy, just willing. We got involved through a group in our church. It’s a great team building activity for both companies and organizations. It’s also perfect for individuals who want to support a worthy cause. To find your local chapter or donate go to www.habitat.org 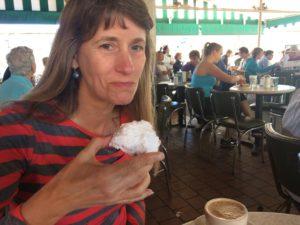 Trip Update. On top of our volunteer work in New Orleans we’ve seen some great sites and experienced some great—frankly too much—food. Now we move on to Biloxi, Mississippi to catch up with Keith and Jill, friends from our Air Force days in Germany.