Posted by Dennis Brooke on Apr 19, 2016 in The Camino, Travel Update | No Comments

Saturday, April 18. Viana, Spain
I sensed that he was following us. We had walked out of our Hostal (hotel) room in Pamplona after a day off. We had all our gear on for our 21+km hike to the charming little hamlet of Obanos. As we crossed a square heading toward the point where we would pick up the Camino again, a white haired man, probably in his 70s, was standing on the sidewalk. As we passed he turned and seemed to be following us. We went about 50 meters with him in tow and I was about ready to tell Laurie to stop so that he would pass us. Then he started to talk to us in Spanish. I understood enough that he recognized us as peregrinos and he wanted to give us directions to the way. We thanked him and he sent us off with the traditional “Buen Camino” greeting. 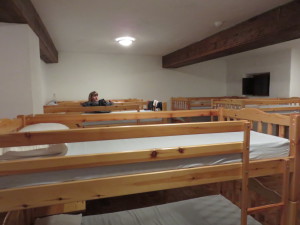 It’s been several days since our last update. After spending an extra day in Pamplona we walked to Obanos, enjoying dramatic scenery and saw two key sites from the movie, “The Way.” On my FB page I have a video from Alto del Perdon where a monument to medieval pilgrims is located in line with windmills. The wind was strong—which makes it a good location for modern windmills.

The church where Yoost and Thomas meet Sarah in “The Way”

Our recent days have been spent getting to know people and hear their stories. Some we encounter again and others seem to drift away on either a faster or slower current. We’ve spent several nights in pilgrim albergues where we share rooms with other pilgrims. Thankfully, few of them snore loudly.
We stopped at the bridge (not pictured in this post) where Martin Sheen lost his backpack in “The Way” movie and met Sofia and Maria, two young women from Puerto Rico, who went to an intense and competitive performing arts program in NYC. We walked with them the rest of the day and yesterday, talking everything from politics to life choices. We also went to the famous wine fountain on The Camino where we shot a short video with them–also on my FB page. (Loading video to YouTube is a challenge in my current situation) 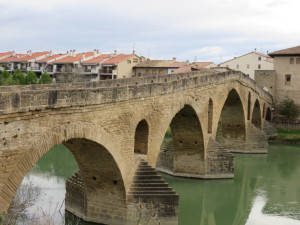 Soon after that we ran into Jerry and Beth, a couple from Kentucky we had met on our first day out of Pamplona, and the six of us walked together to Los Arcos where we spent last night. That was a 27 km day for Sofia, Maria, and us. Too tough, as it turns out, for Sofia’s tendinitis afflicted knees. She’s bussing to the next big town. Our Kentucky friends joined us in the short trek to Viana. Maria is hoping to meet us here later.
We’ve walked over 150 km—about 19 percent of the 800 km route to Santiago. It’s challenging, beautiful, and amazing.
Geography Note: Tomorrow we pass out of the Navarre region into the Rioja region. Basque Country ends effectively here. 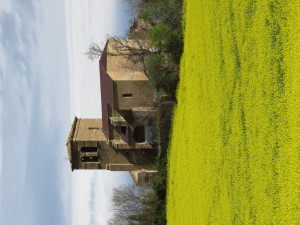 Ruins Against a Field