Posted by Dennis Brooke on May 1, 2016 in The Camino, Travel Update, Uncategorized | No Comments 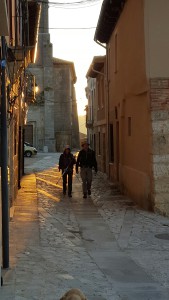 We’ve been walking the Camino since April 9th and have passed through large towns like Pamplona and Burgos and towns with populations of 50. After so many days the smaller villages tend to blend together.
But several have touched our hearts. In my case, none more so than Castrojeriz.
Castrojeriz is a declining village with a population of about 500 or 800—depending on if you believe the guidebook or the sign outside town. The ruins of a ninth century castle look down benignly on the sleepy hamlet. As we walked in locals gave us the traditional “Buen Camino” greeting. In some places you get just a nod.
The rich past of this village is apparent in the beautiful monasteries, churches, and walls. Roman, Visigoth, and Moorish conflicts dot the history of Castrojeriz. James Michener highlights the place in his classic book, “Iberia.” 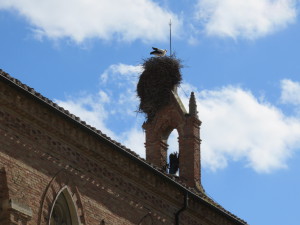 Storks at Work at our Carrion de los Condes

One plaza with a popular bar overlooks the valley beyond and was a popular gathering place with fellow peregrinos. When I polled our dinner companions tonight several mentioned Castrojeriz as being their favorite. One Australian, said he felt like it was home.
It is a mixture of well kept homes, ruins, and “Se Vende” (for sale) signs on places that have—potential. I can imagine a group of English speakers investing in this friendly town and creating a home away from home—an enclave that cherishes the local life and history and wants to reverse the slow decline. 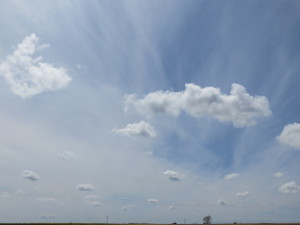 The most touching experience took place the evening of our stay. The Ultria Albergue where we stayed invited us to a wine tasting in the Medieval cellar underneath the building.
We descended into the cellar with a dozen or so other peregrinos. The owner relayed in Spanish (sometimes translated) how the cellar was once part of a tunnel system connected to the castle on the hill. He showed parts that dated to Roman times. He took us though a narrow passage that served as a pinch point to make invading soldiers vulnerable to defenders. And he enthusiastically used his laser pointer as a sword to demonstrate the point on latecomers.
And as we tasted a small glass of wine (it was fine, the tour was the point) a group of French Peregrinos broke out into song. One young woman later explained to me that it was the traditional song of French Camino de Santiago Pilgrims. It made me yearn for an English song of our own.
If my heart has a hometown in Spain, it is Castrojeriz. 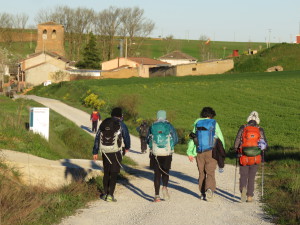 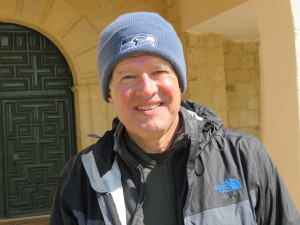 Trip Update: We have completed over half the distance of our journey. Today marks our 16th straight day of hiking 20 or more kilometers a day. In two days (Monday, May 2) we reach Leon where we’ll take a full day or rest at the Parador San Marcos, the same hotel featured in the movie “The Way.” So far, we continue to build callouses and not blisters.