A Duck and a Lizard Walk Into a Bar 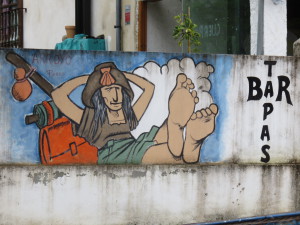 No, it’s not the opening line to a joke. And for us, it happens several times a day. But first, a little context.
In Spain what they label as a bar is really a combination of a café and social center—that also serves alcoholic beverages. It is also of central importance to your average peregrino: el bano/water closet/bathroom. In small villages you are likely to find the children of the owners underfoot or playing off to the side. 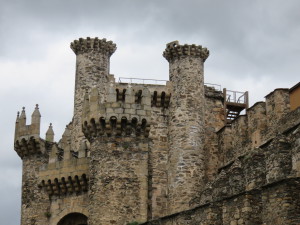 In large cities like Pamplona and Leon you’ll find chain fast food restaurants like Burger King, but in most of the Spanish towns we pass through, the bar is where you can get any meal.
We usually set forth each morning about 7:30. If there’s a town within six kilometers (an hour to hour and a half walk) we wait to eat and stop at a bar for breakfast and an el bano break. And throughout the course of the day we stop every several hours at a bar for a snack, café con leche (coffee with milk), tea, or, in the afternoon, a small beer for me. It provides a nice break to the walk and a chance to use the facilities. Frankly, public facilities are usually limited to what we would call “El bano natural.” 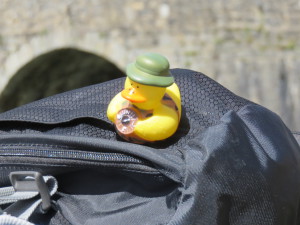 And what about the duck and lizard in the title? Perched on my backpack is a small rubber duck and hanging from Laurie’s is a jeweled lizard. The mascot for my last project team at work was the duck. It’s too late to make a long story short so I’ll skip how that came to be. When I left they gave me a rubber duck with a compass in his chest and nicknamed him Moby Duck. 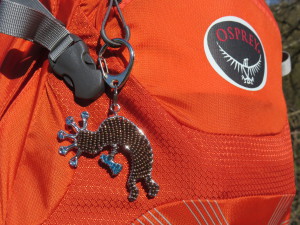 Laurie’s lizard is from Donna, a longtime friend and neighbor from our former neighborhood in Auburn, Washington. I’d say it answers to the name of “Izzy” but it doesn’t answer to anything.
Both help distinguish our backpacks and remind us of friends. They’ve also started interesting conversations. One young Spanish woman suggested if I got hungry on the trail I could eat Moby. So far, he just walks into bars with us.

UPDATE: Turns out that Laurie’s “lizard” is really a Kokopelli from the American Southwest. thanks to our friends and readers who pointed it out. 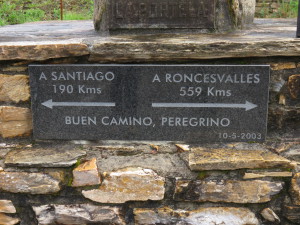 Travel Update: We have been on the Camino since April 9th – thirty two days ago–with only three days off. We started with 800 km to our destination in Santiago and now have less than 170 km left till we reach our goal. We’re overnighting in Las Herrerias which is at an altitude of 705 meters. Tomorrow we climb up to O’Cebreiro at 1330 meters. We reach the high point on the Camino (1335 meters) just beyond. 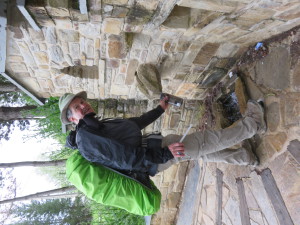 The village where we’re staying has a horse service to the top. I read they are so well trained that they take riders up without guidance and then return on their own. Either that or the one that just walked by unencumbered bucked off their rider and returned early.
The last couple of days have been marred by rain and injuries. Laurie is sporting her first blister and I have some swelling on my left shin that has slowed us down. Several nights back we roomed with two Spaniards, one a nurse, who looked at my shin injury. She suggested amputation when I got back to the U.S. But, it’s improving. Frankly we are blessed to have made it this far without getting injured. 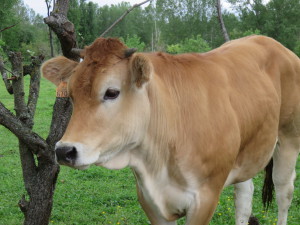 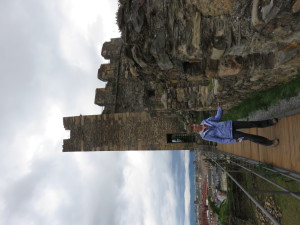 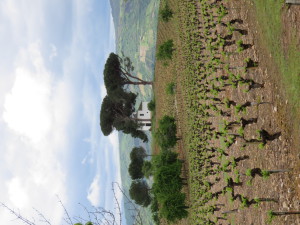