Posted by Dennis Brooke on Apr 8, 2016 in The Camino, Travel Tips, Travel Update | No Comments

TRAVEL UPDATE: By now we expected to be hiking the Napoleonic route out of St Jean to Santiago de Compostela. It’s a 25 km route with a climb of almost 1400 meters over the Pyrenees into Spain. It’s the most strenuous part of the Camino but we’ve prepared well and have heard that it offers amaking views.
Alas, not on this trip. There was already a meter of snow on the top and last night it snowed all the way down to the 600 meter level. That route is probably closed for another two weeks. Where is global warming when you need it?
On top of that, Laurie is struggling to recover from a cold. We opted for a private room in a place we booked through Airbnb rather than the less expensive albergues (hostels) most pilgrims use. Hopefully with an extra day of mostly rest she’ll be up to tackling about 12 km of the lower route tomorrow. We plan on stopping at a hotel in Valcarlos where she can still get almost a full day of rest.
The high route was favored by Napoleon for his invasion of the Basque Country but the low route we’ll take was used by Charlemagne for his incursions into the area. However, the history of war and noted generals goes way back before that. 75 years before the birth of Christ the Roman General Pompey camped in the region and founded Pamplona. We expect to be there by early next week. Unfortunately, long before the traditional Running of the Bulls. (Laurie dissents—she says fortunately we won’t be there for the running.) 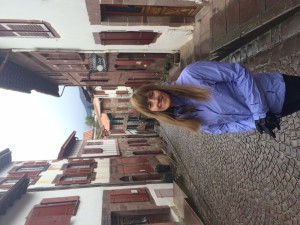 Laurie in the streets of St Jean

THINKING LOCAL: When we travel we do our best to assimilate ourselves into the local culture. That means learning key phrases in the local language, remembering that in Spanish or Basque areas shops close down for an afternoon siesta, and bringing toilet paper in case you need to use public facilities. And in the case of every other country in the world other than the US, Liberia, and Burma, that means metric measurements. That’s right—even the English don’t use the English system of measurements anymore.

That means our distances and measurements in these posts will be metric. If you think in the English System (like we still do) and want some rough equivalents:

If you have questions of comments feel free to post them. And please keep Laurie’s recovery in your prayers.