Part 2 of a Multi-Part Series 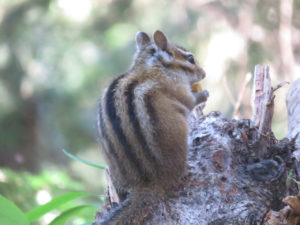 During our ten-day hike around Mount Rainier with our friends Kim and Trev, we saw many of the indigenous residents of the national park including marmots, squirrels, chipmunks, and pikas. On one memorable section, we heard the distinct sound of elk bugling.

We were also hoping for sightings—at a distance—of bears. But two of our experiences with bears turned out to be encounters, not sightings. 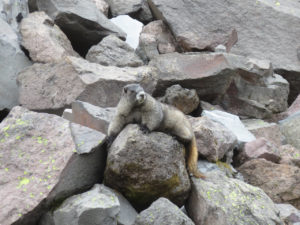 In high meadows, we encountered yellow-bellied marmots, basically a very entertaining, cat sized ground squirrel. We often knew they were present because they have a distinctive whistle which earns them the nickname “whistle pig.” In one section of the park we watched a mother and pup race each other across a ridge. On our last evening on the trail one was so acclimated to people that it stood on its legs to observe us approach, then went back to grazing on the lupine. We stood on the trail four feet from him as he munched away, back toward us. 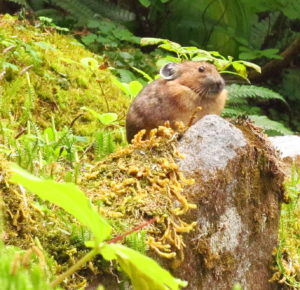 Pika on Rainier (Photo by Trev)

In rocky areas of the park we saw pikas, much shyer than the marmots but even more adorable.  Pikas are a cousin to the rabbit and give out a distinctive “meep” sound that echoes through the rock falls. During a training hike in the Cascades before the Wonderland a pika we nicknamed “Petey” made regular appearances near our campground, and puzzled Cola, our friend’s dog, that was hiking with us. At one point Petey grew bold enough to run right behind Cola.

But when you hike Mount Rainier you anticipate, and worry about, bear sightings. Although there are no recorded incidents of bear attacks in the park, there have been twenty-five fatal black bear attacks in North America over the last 20 years. 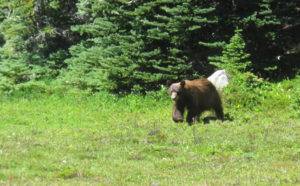 Our first bear encounter was in the Mystic Lake area on the north side of the park. Two young men from Peoria who were on day one of an attempt to run the 93-mile trail in three days stopped to tell us they had encountered a bear just a few minutes up the trail in the direction we were heading. It was grazing on huckleberries and they waited until it finally moved. We headed west, keeping our eyes open. About fifteen minutes later, Laurie heard a rustling and pointed it out to me. I looked over and a large, black bear was moving through the trees 30 feet to our left. I told her what she’d heard and we kept moving calmly up the trail. We got up on a ridge and turned around, but the bear was gone, and didn’t stick around for photos.

Several days later we were descending toward a river crossing and encountered a hiker who had been coming up a series of switchbacks when he saw a bear heading directly towards him. He talked loudly, but it kept coming. The hillside was so steep that he had no way to escape other than retreating. Finally, it sensed him and headed down the hill. Laurie, Kim, and I proceeded down the trail, anticipating a sighting, and about ten minutes later heard some crashing in the woods below. We waited for a few minutes, but saw nothing further, and kept moving. Trev, who was a short distance behind us was more patient. It turned out it was the bear. It paralleled the trail just below him for a while before popping up to look him over, and then retreating. 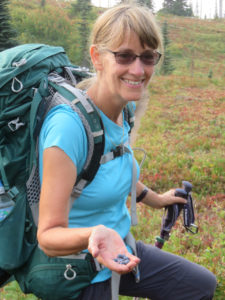 But our closest encounter was on day nine of the hike on the east side of the park. That part had reopened just the day before. We were heading down to Indian Bar camp and stopped on the trail to graze on the tangy huckleberries which were in season. We hadn’t seen any other humans since the afternoon before and thought the trail was ours.

Laurie and I heard a loud “chuff, chuff, chuff,” sound nearby. She turned to me to ask, “Is that me?” On the trail your backpack sometimes shifts and makes odd sounds.

I glanced to the right and 20 feet away a fully grown black bear was retreating into the woods. We had been grazing on his berries.

I said, “There’s a bear. Right there. Keep moving.”

It was way too close to stop for photos.

Related Posts: Smoke Gets in My Eyes: A Backpacking Journey Around Mount Rainier

Note: Apologies for the long period of time since our last post. Our website was hacked but is back up now. 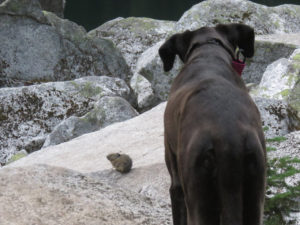 Cola puzzled by Petey the Pika (On a North Cascades hike)