I know many of you are thinking, “Hello! Haven’t you heard of Pearl Harbor which is in Hawaii?” But this is a trick question. Hawaii was only a territory during World War II. Besides, our journey across America doesn’t take us through the most junior state. 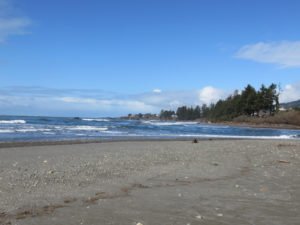 On the second day of our trip we passed through the town of Brookings, Oregon. This quiet place on the Pacific Coast and Highway 101 is walking distance from the Oregon/California border. But during the Second World War it came under attack by Japanese air forces.

On September 8, 1942, less than a year after the attack on Pearl Harbor, the Japanese submarine I-25 surfaced off the Oregon coast. The crew assembled a Yokosuka E14Y floatplane and catapulted pilot Nobua Fujita and observer Shoji Okuda on a mission to drop two incendiary bombs in the woods near Brookings. The intention was to bring the war to American shores by creating a devastating forest fire. The aircrew dropped their bombs, and safely returned to the I-25. 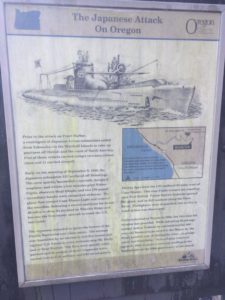 Fortunately for the citizens of Brookings, it had been a wet summer. Although the bombs detonated, vigilant fire lookouts spotted the fires and they were quickly put out. Bomb fragments were turned over to the FBI and military but the incident was kept quiet to avoid panic among the American populace.

Twenty days later the crew launched another attack. Although they were seen by ranchers and fire lookouts, no fire resulted.

Lt Fujita survived the war. In 1962, he was invited to the Brookings Azalea Festival as a guest of honor. He accepted, under the condition that he wasn’t going to be tried for war crimes. He presented the city with his 400-year-old Samurai-type sword to pledge “peace and friendship.” Upon his death in 1997 he was proclaimed an honorary citizen.

Side Note. Oregon was also the only site of mainland fatalities during the war. Japan launched over 9,000 “Balloon Bombs” that rode the jet stream to North America and were intended to start fires and cause panic. They were found in 17 states, the Alaska territory, Mexico, and Canada. One was discovered by a pregnant woman and five children near Bly, Oregon—to the east of Brookings in south-central Oregon. She and the children were killed when they disturbed the balloon.

Updates from Readers. Laurie’s grandmother reported, ” My uncle, Leslie Colvill, worked for the U.S. Forest Service and was one of the first responders to the attacks. He never talked about it until after the war was over.” One of our other friends mentioned that, “…that the Japanese also bombed Dutch Harbor and invaded/controlled two Aleutian Islands.” That is true, but Alaska was also only a territory at the time.