Posted by Dennis Brooke on May 8, 2017 in Travel Update, United States | 2 Comments

With malice toward none, with charity for all…
Abraham Lincoln 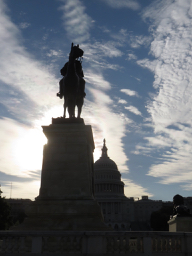 Sometimes short stops on this trip can also be the most memorable. Such was the case to a small village in a Virginia County whose motto is, “Where our nation reunited.”

The American Civil War effectively ended at the village of Appomattox Court House on April 9, 1865. A week earlier, General Robert E. Lee had evacuated his Confederate Army of Northern Virginia from positions protecting the Confederate Capitol of Richmond, Virginia and nearby Petersburg. For ten months, his troops had withstood a siege by the armies of Union commander Ulysses S. Grant, but lack of supplies and superior forces forced him to retreat. 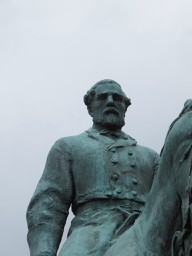 For seven days, he worked his way west in a series of running battles. He nearly broke through—but was cut off by Union cavalry commanded by Brevet Major General George Armstrong Custer—who is remembered more for a different battle—11 years later.

After four years of war, nearly three quarters of a million Americans killed, Lee arranged to surrender his forces to Grant at the tiny village of Appomattox Court House. The terms of that surrender laid the groundwork for the process of reunification. 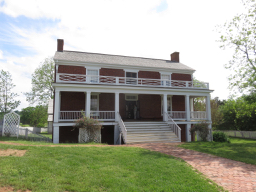 Grant and Lee met with their respective staffs in the parlor of the McLean House. Lee was dressed in a clean, new uniform. Grant wore a mud splattered uniform. They talked about their only previous encounter as officers during the Mexican-American War. Then, the two West Point graduates got down to the terms of surrender. 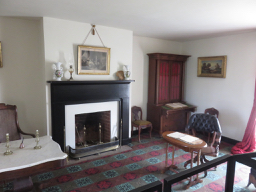 This was a critical point in American history. Human nature demanded revenge. But Lincoln had clearly instructed that Grant should begin the process of healing a nation. In the parlor of the McClean house, the Union Army Commander wrote out the terms of surrender, in between puffs on his cigar.

Grant gave the Army of Northern Virginia parole to return home, only requiring that they not take up arms against the United States again. They could keep their side arms, private horses, and belongings. It essentially granted them amnesty as long as they behaved themselves.

The house itself is still there—but had to be reconstructed. At one point, it was sold to speculators who dismantled it and packed it up with plans to move it to Washington D.C. as a museum. It was later reconstructed on the original spot with mostly original materials.

One of the interesting things we learned was that each Confederate soldier was given a parole pass. One of the remaining original buildings is the Clover Hill Tavern, where temporary presses were used to print over 28,000 parole passes. Laurie served as printer’s assistant during the demonstration. Those passes gave safe passage back home to each solider, and immunity from prosecution. This included Lee, who was protected from prosecution for treason. 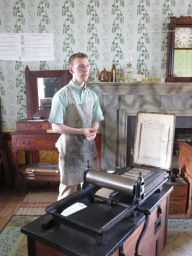 Printing parole passes at the tavern

Within months after the ceremony at the McClean house, the rest of the rebel forces capitulated, and the union was restored. The process of healing wasn’t easy, but the generous terms laid out at Appomattox Court House contributed to the process.

Travel Update. We’ve spent five days in the capitol of our great nation, visiting the White House, the Capitol, the Press Club, and hanging out with fellow citizens of this great country. Regardless of discouraging events, we have a great heritage. And we have a great future.