Laurie and I were born and raised in Washington State, the state closest to Alaska. But we’ve never made the trek up north to visit the 49th member of these United States. Something about cold and mosquitos kept it off the top of our list. But we’re currently on a ten day “scouting trip” up here and wanted to share interesting things about our first stop, Anchorage.

Anchorage is the largest city in the state. We’re here mainly because we wanted to reconnect with friends and it was a good starting point for our visit.

Cool things to do in Anchorage:

Bike the Coast. We rented bikes from Downtown Bicycle Rental (super helpful and reasonable) and biked along the Tony Knowles Coastal Trail, a 20+ mile paved route that goes through urban and forested areas. We saw bald eagles but no bear or moose—which are often seen on the trail. Which brings me to the next cool thing to do which is… 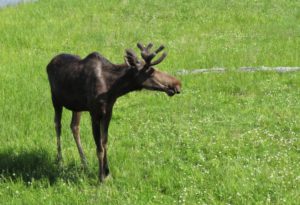 Moose Watching. These big critters frequent the city like alligators in Orlando. In fact, the Anchorage Daily News publishes a calendar each year with moose pics sent in by readers. We didn’t actually see one until we were driving home with our friend from his place in the suburbs.

Bear Watching. Maybe not so much in the city, but they’re plentiful in the burbs. Here are two security videos showing bears browsing for trash—one failed, the clever one, a winner. One thing we learned is that in Alaska is that we in the lower 48 call grizzly bears, they classify as either brown bears or grizzlies. They’re the same species, but grizzly bears are a slightly larger subspecies which lives farther inland. Either, can mess you up. 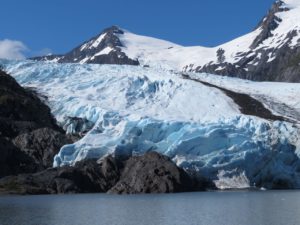 Get out of Town. We took a tour with Planet Earth Adventures and drove up the Turnagain Arm waterway with Matt—full time nurse, part time tour guide, and a mother and daughter from Minnesota. The trip included a cruise on Portage Lake to see a glacier, a lunch stop in Girdwood, and a visit to the Alaska Wildlife Conservation Center. 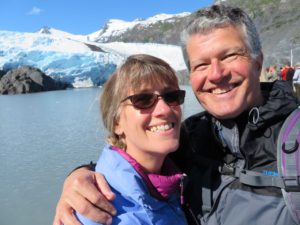 Travel Update. We are in the Seattle area most of the summer until mid-September. Our plan is to head to Italy and spend 30 days hiking from Florence to Assisi to Rome on the “Way of Saint Francis” pilgrimage followed by two months in Spain.