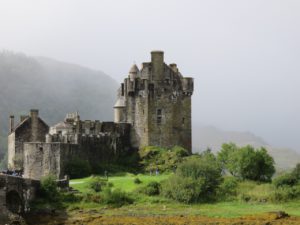 You have to love a group that chooses to go back and rescue a trapped lamb.
After two weeks of living in Glasgow, Laurie and I decided to wrap up our Scottish adventure with a bus tour of some more remote areas. We opted to go with a local company named Rabbies for two key reasons:
– They limit their group size to 16 or less;
– Their tour went to the Outer Hebrides where one of my favorite authors, Peter May, bases many of his novels.
We were a little concerned about doing a six-day bus tour. What if some of our fellow travelers turned out to be a wee bit…annoying? While in Dublin we took a day bus trip up to Northern Ireland where we had to listen to a fellow American brag about his confrontation with a server at a local restaurant;one of those guys who typifies the “ugly American” traveler. Or what if we wound up with people who habitually showed up half an hour late—while the rest of us waited. And, what if the tour guide was annoying. 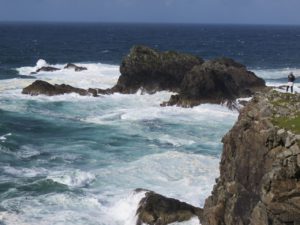 Powerful winds and waves at the Butt of Lewis

We didn’t need to worry—we lucked out in all respects.
Our fellow travelers bonded early. It was a mix of couples, singles, younger and older. It included a Chinese grad student of English Literature, a young man from Taiwan, an English couple celebrating a milestone birthday (which one, I won’t mention), six Canadians, and a Catalonian—don’t make the mistake of calling her Spanish—she’s Catalonian.
During introductions I confessed that because of the current presidential race we sometimes claim to be Canadians in order to abdicate responsibility. 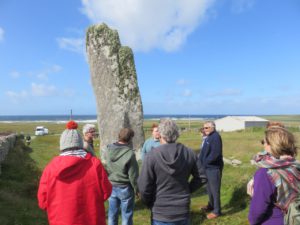 The “Clan” at a standing stone: Isle of Lewis

Our guide, Mathew, was born in England but moved to Scotland in his youth. He did a fantastic job of adapting the itinerary based on our interests and weather. He picked up on the fact that two of our group were bird watchers (called twitchers here) and pointed out interesting feathered creatures. He noted the interest that a Canadian father and son had in their ancestral Scottish clan and made sure to hit several key locations for them. When I explained my admiration for Peter May he did express the opinion that those murder mysteries were seen as rather ghoulish in the peaceful Outer Hebrides, but pointed out several sites used as locations in May’s Lewis Trilogy. 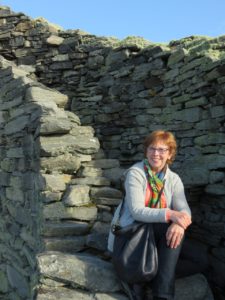 One of our Canadian Clanswomen

Part of the fun was watching how the group took care of each other. Early on we were sharing OTC medications to combat seasickness on the crossings to and from the Outer Hebrides and melatonin to help with jet lag. At the end it was related to the colds several of us had picked up.
We also developed friendships because people went out of their way to include each other. The group was also good about making sure everyone was included in meals and conversations. One of our Canadians was a retired civil servant in finance who I noticed was especially adept and purposeful about engaging people in conversations. And some of the inclusion was related to gentle teasing. Our Catalonian had a cheerful personality that you’d like to bottle—I think Rabbies should be recruiting her. And we endured some ribbing about the ongoing antics of one of our presidential candidates—whose mother happens to hail from the Outer Hebrides. 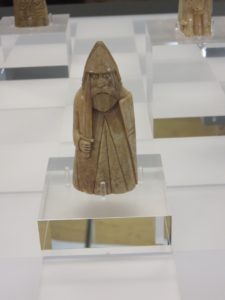 During our six days we got to see some amazing sites including castles, Loch Ness, ancient stone circles, forts, sites from movies and television series, and many natural features. Matt did a great job explaining both historical and cultural background of the area, with a generous mixture of interesting stories and legends.
We also visited places that would be tough to see on a large tour. We talked with a weaver of the famous Harris Tweed in the weaving shed at his home—including time playing fetch with his border collies, toured the only whiskey distillery on the Isle of Lewis (number of employees: about six), and saw how many islanders lived in peat-fire heated blackhouses—some up until the middle of the last century.
In the end the trip was more about the shared experiences, meals, and conversations with new friends.
Oh, and that sheep we rescued? Mathew noticed a lamb who had his head stuck in a gate along a single lane road. He was concerned that it might be trapped for several hours without some help. He did a quick poll and we opted to go back. It was still stuck. Fortunately, our presence spooked it enough that it pulled itself free without any intervention. 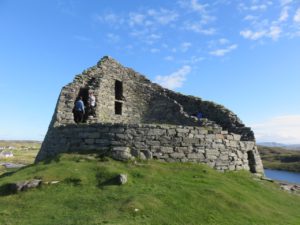 You have to admit, you have to love a group that cares more about saving a lamb than getting to the next location on the itinerary.

Thanks to Malcolm for coining the “New Scottish Clan” name for our group.

Travel Update: We have settled into a nice flat in a quiet neighborhood in the Kensington neighborhood of London. We’re walking distance from Notting Hill. Sunday I plan on visiting a church that features a legend about the apostle John and King Edward the Confessor in stained glass and on screens.

We’ll be here for a week before moving to the south coast of London for ten days and then the Isle of Wight for the month of September. 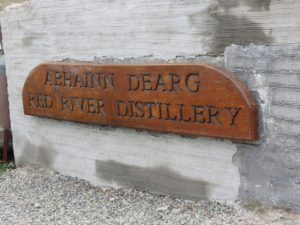 Lone distillery on the Isle of Lewis 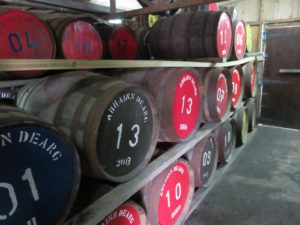 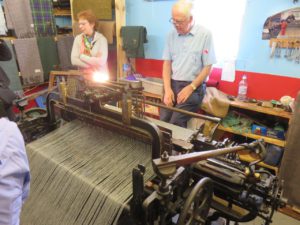 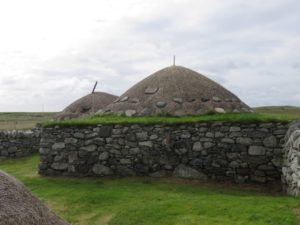 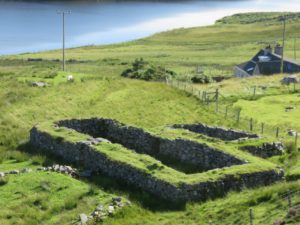 Ruins of a blackhouse