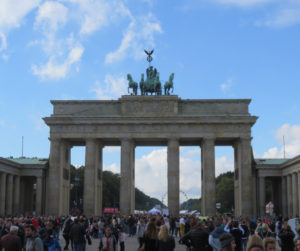 Most of our time since we left the United States on April 3rd has been spent living in and exploring new territory like Portugal, Ireland, Scotland and southern England. Our last week abroad is in a city we visited before, but the change since our last visit here is so profound that it’s almost like new territory. 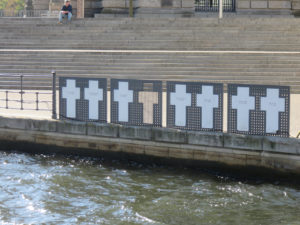 Laurie and I lived in Germany from 1988-1991 when I served as a USAF Airport Manager at a small base named Sembach and she worked at Ramstein Air Base as a civilian in accounting. When we arrived the country was divided and the Cold War looked like it would go on for many more decades. But a year and a half after our arrival the will of the people won out and on November 9, 1989, the wall came down. I wrote about my experience visiting Berlin in March of 1990 in this post called “Keeping the People In.” We returned in August of that year with our friend Julie for another visit. 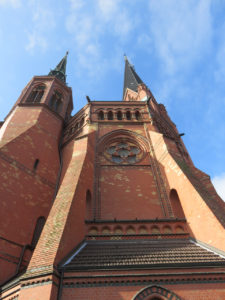 It’s been an extremely moving experience to see the change in the city. On Sunday, our first full day in the city, we went to services at the American Church in Berlin. Afterwards we traveled to the Brandenburg Gate. We exited the subway in what was once the “death strip” between the inner wall surrounding West Berlin and the outer wall keeping East Berliners from crossing over. The area that had once been populated by booby traps, attack dogs, and guards being watched by other guards is now home to the embassies of the US, France, Great Britain, and Russia. It also sports hotels, shops, and…a Starbucks. 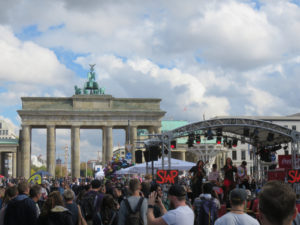 The avenue stretching to the west was the site of a fest celebrating the 26th Anniversary of the unification of the two cities and the two Germanys. It was populated with stages for live music, carnival rides, food venues, and of course, beer sales.

Yesterday we took a three plus hour boat ride on the River Spree and a series of canals that circled the city. During the Cold War the wall cut across the river and those canals to keep people from escaping. Now it’s a venue for a pleasant afternoon. 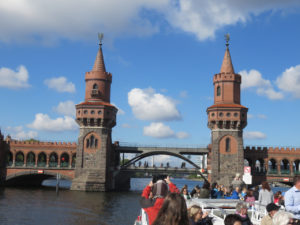 Cruising on the River Spree

We ended up in Alexanderplatz which was a former “showcase” for East Berlin. But the shops in those days were facades—plenty of stuff in the windows but little to nothing inside unless you could show a Communist party card. When Laurie visited before the fall of the wall a trash can was on fire, but everybody ignored it. During our visit after the fall, but before unification, Alexanderplatz was sparsely populated and still gloomy.

But yesterday it was crowded for an Oktoberfest/unification day celebration. The plaza is surrounded with stores full of goods—no party card required. There’s no indication of the former gloom. 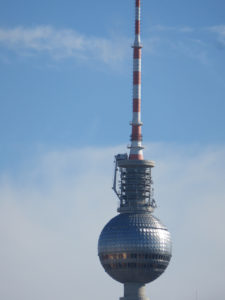 The TV Tower with “Pope’s Revenge”

One thing that hasn’t changed is the 368 meter tall television tower erected by the East Germans in 1969. When the sun hits the tiled dome of the tower the reflection appears in the form of a cross, affectionately known as the “Pope’s Revenge.” The communist authorities didn’t like this Christian symbol, but despite paint and other measures, they couldn’t erase it. It was brilliantly obvious in the sun yesterday.

One little known fact about the fall of the wall was how it could have become a bloodbath. I went to a briefing at Templehoff Air Base in Berlin in March of 1990 and the USAF officer in charge told us how on 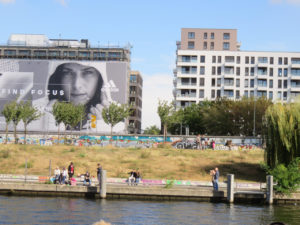 Longest remaining section of The Wall

November 9, when the announcement of free travel was made by an East German authority at a press conference, the date of the change wasn’t mentioned. On the back of the briefing note it said that the change would be effective the next day, to give them time to notify the guards. But he didn’t turn over the note to see that. When a reporter asked him when it would be effective he improvised and said, “Immediately.” The guards at the wall weren’t prepared for the mass of citizens who showed up expecting free travel and under standing orders, should have shot them. Fortunately, cooler heads prevailed and they let them through. 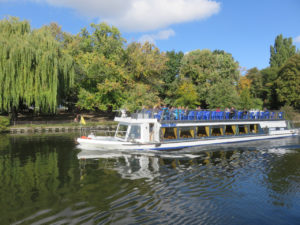 Seeing a united Berlin makes all those days of long duty as an Air Force officer worth it. Some of the German language we’ve forgotten is trickling back–almost as if by osmosis. We’re looking forward to a week of exploring this city and sharing in the joy of a united and free people.